Before we adopted internationally, we had adopted three times. We had already experienced transracial adoption and special needs adoption and to some extent, we thought we knew what we were doing. We didn’t expect there to be too many surprises. Were we ever in for a shock! 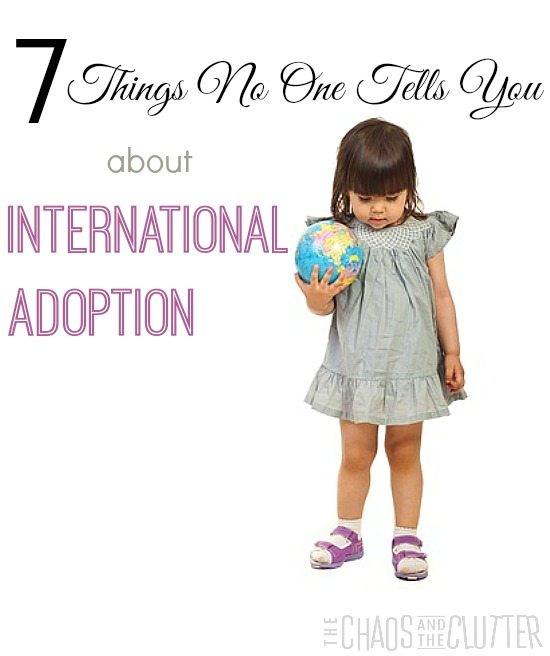 I am aware that every situation is different and there may be things on this list that do not apply to your circumstances. I know that some of these could also apply to other types of adoption. I have compiled this list through a combination of my own experiences and the conversations I’ve had with many other adoptive moms.

In no particular order, here are the things that no one tells you about international adoption:

There are countless books and articles on promoting attachment with your newly adopted child but the majority of those focus on how to get the child to attach to you. Attachment is of paramount importance in adoption but what few people talk about is that attachment may not come naturally for you, particularly when adopting an older child.

I hope that just by identifying these things, I can help others who feel them know that they are not alone and that having these feelings does not make them a bad parent.

For me, attachment came instantly with the children who were placed with us as babies and it even came instantly with one of our internationally adopted children even though they were considerably older, but it took more time with the other. It was something I wrestled with and spent far too much time feeling guilty about. I wish someone had told me that it was perfectly normal and didn’t make me a bad person.

2. Your kids will not be grateful.

Your child may well have needed a family. They may have had a very bleak future had you not adopted them, but this does not mean that they will be thankful or express gratitude. In fact, they may express the exact opposite. They may hate or resent you for taking them from their home, their culture, their language, and everything that was familiar.

They may (or may not) initially appreciate things like clean drinking water, abundant food options and safety, but the novelty will wear off quickly and you will likely soon find that they are complaining about the food just like any other child their age in our society would.

Do not expect gratitude from your child about being adopted. They did not ask for the life they have. If given the choice, they would most likely choose to not have had the circumstances that brought about the necessity of their adoption in the first place.

3. People will judge you.

I know that people judge others for all kinds of things, but for some reason, international adoption seems to bring out the naysayers.

During our adoption, our case was in the media spotlight and we were accused of all kinds of not-so-kind things, but even after the media attention died down, there were strangers, acquaintances and even some friends and family who felt the need to have their objections and opinions heard.

Among the most common was being angry that we wouldn’t just adopt the kids in our own country that need homes (we had done that three times already, but even if we hadn’t, the kids in other countries who need families are no less deserving of having a family than the children here). Other common comments were in regards to adopting trans-racially, spending money on the paperwork for the adoption when we could have given that money instead to the country our children were born in, and just adopting because it was trendy (that one is laughable and counter to all the statistics available!).

While I could write an entire article on each of the objections we heard and my response to those, the point of this article is to inform those considering adoption that they are likely to have this happen to them as well. We lost friends. It hurt.

And of course, then there are the hilarious questions we hear from strangers when we go out in public!

4. You will sometimes question if you did the right thing.

Since completing our international adoption more than five years ago, we have continued to educate ourselves about ethics in adoption and more specifically, the adoption ethics in the country we adopted from and this has sometimes caused us to wonder if we did the right thing.

Also, our entire family, including our other five kids, have been forever changed due to some of the challenges that have come into our home due to our internationally adopted children’s attachment and trauma issues. It has not been easy and sometimes we have questioned if we did the right thing by our other kids by taking this on. That’s a pretty hard thing to admit to.

I do, however know from other moms who have opened up to me that those feelings are not uncommon. It’s okay to question if you did the right thing.

Most days, I look at our kids and the tremendous progress they’ve made and all the potential they have and the opportunities ahead of them and I am thankful. 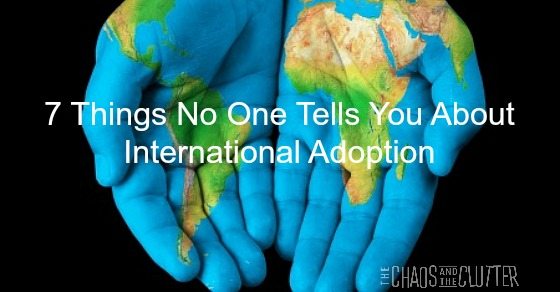 While there are certainly circumstances where any amount of openness in the adoption would be harmful for the child, in many cases, having ongoing contact with birth family can be a positive.

I don’t want to share much of our story in regards to this because the story belongs more to my children than to me, so I will speak in generalities. I can say that I’ve been surprised at the number of families that have found a way to have contact with their child’s birth family even in international adoption.

In international adoption, the children adopted tend to be older, therefore, some have memories of time spent with birth family. Like all children, they love their birth family and once they are far away in another country, that love does not end. This can cause them to worry. Contact through letters or pictures or even e-mail or phone calls when possible can ease some of that worry. Contact with birth family can answer questions your child has and can help them to feel connected rather than having that tie completely severed.

6. RAD, PTSD, FASD, and SPD could be a reality for you regardless of where you adopt from, how old your child is at the time of the adoption, and what background information you are given.

Another thing that is often expressed to me by those who are interested in pursuing international adoption is that they are trying to avoid the likelihood of their child having FASD. (FASD is fetal alcohol spectrum disorder and occurs when a mother consumes alcohol during her pregnancy.) While there are countries where the likelihood of FASD is lower than in North America, the effects of malnutrition or early trauma on the developing brain can be just as devastating. There are also countries where the risk of FASD is even higher than it is here.

RAD is Reactive Attachment Disorder and although many are aware of the potential for this in adoption, they are sometimes told things like that it does not happen with children from a particular country (I fell for that one!) or with children who are below a certain age (others I know have fallen for that one). RAD is a very serious illness that affects an entire family and is not always “curable”.

PTSD stands for Post Traumatic Stress Disorder. Until we were parenting two children with it, I had no idea that children could have this.

SPD stands for Sensory Processing Disorder and is extremely common in all adoptions for a variety of reasons.

Just like when someone has a biological child, there are no guarantees in adoption that your child will be healthy. Even in cases where the paperwork says your child was not prenatally exposed to drugs or alcohol or was not abused or was not neglected and has no special needs, this may not be the case. In international adoption, even the age that the paperwork says your child is may not be accurate.

It is best to research common adoption issues prior to any adoption and go into it with your eyes wide open.

7. You will question your sanity and your ability regularly.

I question my qualifications for this daily. I know that God put them here for a reason and that He thinks that I am the right mom for them, even if I  often doubt my abilities.

Helping a Child Through Trauma

What I Wish You Knew About Parenting a Child with RAD

What Does Behaviour Have to do with Sensory Systems?