She laughed, jumped up, threw her arms enthusiastically around my neck and exclaimed, “you’re the best mommy for me!”  As soon as the words were out, her little body tensed up.  And then she pulled back and looked at me and I saw it…the look of regret in her eyes.  That day, I had taken the kids to the Bethlehem Walk, which was incredible and to gymnastics, where I stayed and watched them the whole time.  The night before, I had planned a Minute to Win In themed Family Fun Night.  Because of those things, she was feeling thankful and full of love for me and had expressed what she felt.  But the words hung in the air and she was wishing she could take them back.  “best mommy”

You see, I have not always been her mommy.  She had another mommy before me, one who loved her and cared for her.  She was 4 the first time I held her, but had been 4 six months before that when her first mommy had last held her.  Her memories of her first mommy are fading and with that, comes the guilt.

As soon as I saw the look on her face when she pulled back from me, I cheerfully said, “Yes, I am one of the best mommies for you.  God chose me to be your mommy now after your other best mommy.”  I felt her body relax and a look of relief crossed her face.  Then she threw her arms around me again and squeezed tight.

The truth for me is that in some circumstances, this is easier than in others.  I don’t want to reveal details about how each of our kids came to need a family, but I will say that 3 of our kids came to us through the foster care system initially and children do not usually end up in that system without cause, so it is more difficult for me to be gracious and take my pride out of the equation in those cases than it is in the case of our internationally adopted children.

Another important truth is that even our Granola Girl who came to us at one day old has intense feelings of loss when it comes to her birth mom.  If I allow myself to be prideful (wanting to assert myself to her as being her only “real” mom), I will minimize her very real feelings and de-value my precious daughter.  But at times, it is hard for me.  I need to continually remind myself that they need validation and permission to feel whatever they feel.

Whatever your true struggle has been this week: a cluttered house, yelling at your kids, battling your weight, harbouring resentment towards a sister-in-law, taking out your frustrations on your husband, feeling guilt over the unfinished lists, refusal to forgive, distance in your relationship with God, feeling inadequate, feeding your kids cereal for supper, having unmet expectations, wishing for something you can’t have, not teaching your kids, skipping church, cutting someone off in traffic, being choked by anger, ignoring your responsibilities, wearing dirty socks because there’s no clean laundry… join in the

Adoption is full of beauty, but it is also full of loss. Our son Snuggle Puppy was 7 years old when we adopted him from Ethiopia 2 years ago. Though that was a wonderful thing for our family and though it means that he is an orphan no longer, it means that he has already experienced tremendous loss in his young life. Snuggle Puppy has lost more in 9 years than most adults have. One of the losses in his life was leaving behind pet dogs when he went into the orphanage. He is a huge animal lover.

For a long time after we brought him home, we considered getting him a pet, but since two of our girls are allergic to dogs and Miss Optimism is allergic to almost all animals, we put it off. We could see though that this boy (whose future aspiration is to be a vet) needed to have a pet. One of my hesitations was the grief that a pet’s death would bring for him, but a few months ago, I took him to a pet store and bought him a hamster. He named his white rodent Snow and fell in love instantly. He took such great care of the little guy and it was really good for him.

Fast forward to over a week ago…Snow went missing. Search parties were set up in the basement. The kids listened for him, cleared out the storage room when they thought they heard rustling noises, and prayed for his safe return. On Friday, we gave up the search and Snuggle Puppy was heartbroken. He sobbed in my arms and wanted to be held most of the day. From an attachment standpoint, I was reassured that he came to me for comfort, but I was so sad for him.

Late Saturday night, a miracle occurred in our house…Fred found Snow alive!!! He put him back in his cage in Snuggle Puppy’s room. Sunday morning, Snuggle Puppy came up to our room and told us his amazement upon waking up to his hamster there. “I thought I was really dreaming!”

Then early this evening when The Husband and I were out on a date, our babysitter called and let us know that Snow had died. Snuggle Puppy was beside himself and needed me to come home right away. I did. (there may be some that think that me leaving a date with my husband because a hamster died is extreme, but believe me, though we have had many hamsters die over the years, this was different)

On my way home, I had a little conversation with God. I was not impressed. I didn’t understand why He would have allowed us to find the hamster ALIVE only to have him die less than a week later, but the more I thought about it, the more I realized what a blessing that was. It became even more apparent when I got another phone call telling me that the hamster was still breathing (barely). You see, Snuggle Puppy has had so many losses in his life and though this loss will bring those emotions to the surface and be another loss for him, the circumstances allowed for something he had never had the opportunity for before…the chance to say good-bye.

Our family went from this: 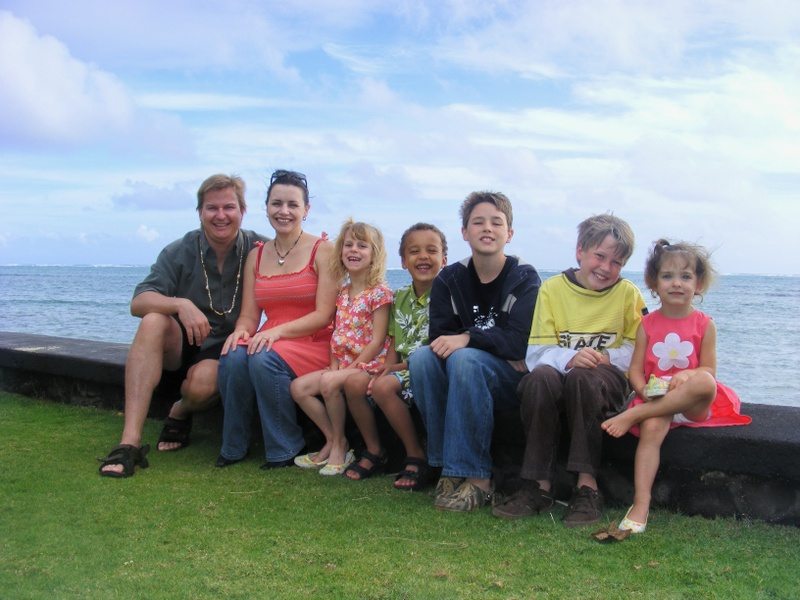 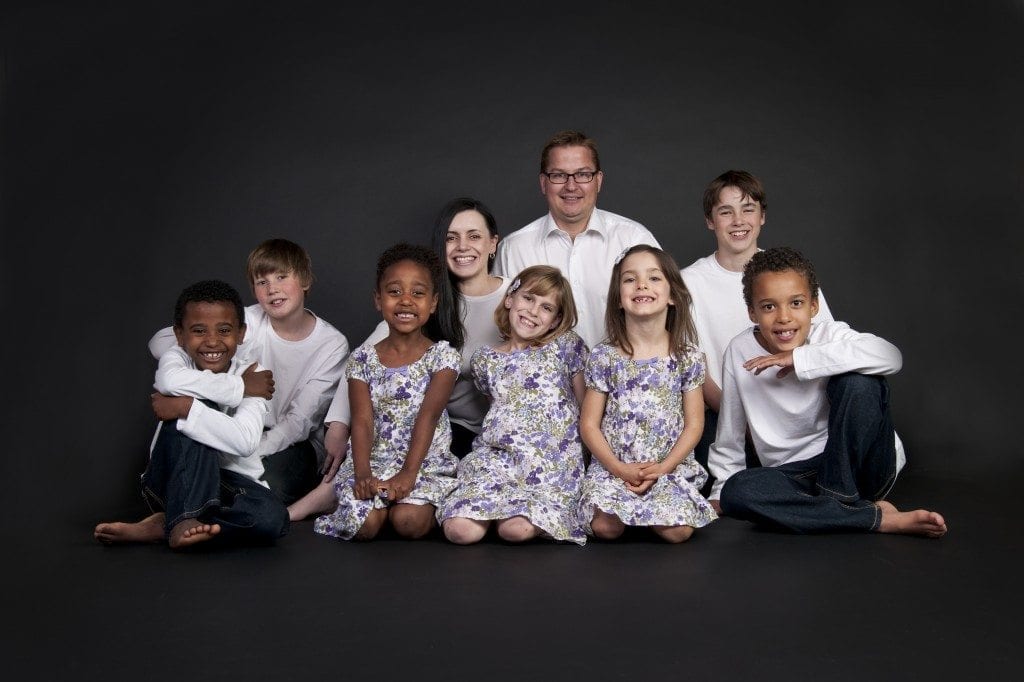 I cannot imagine our lives without Snuggle Puppy and Dancing Girl and I am so thankful that God knew exactly the children that our family needed and that needed us.  They were the missing piece of “us”.  I feel so blessed!

I’ve been struggling with some hard truths lately.  Truths like there really are starving children in Africa.  Growing up, my mom always told me there were starving children in Africa, but it’s different once you’ve been there and looked into their eyes, held them in your arms, seen so much that your heart begged you to look away and you forced your eyes to stay open, to really SEE them, to see the beautiful, precious children of God that they are.

It’s different now.  But it can be easy to try to forget.  It can be easy to get wrapped up in the busy bustle of life and family and problems that seem big and to push those children to the farthest corners of my mind.  It’s easy until it’s not.

It’s easy until my six year old daughter, who used to be one of those starving children in Africa asks me if she can send her money to buy food for the kids who don’t have any food and don’t have clean water.  She asks me this, holding up the pennies she has found, the dimes that she earned helping her older brothers do their chores, and the loonies she got from the tooth fairy.  She ask me this, holding ALL of her money.  All of it.  And I am broken.  I am humbled and shattered and embarrassed by how little we send.  Yes, we send money.  Maybe some people would consider it a lot of money.  But next to ALL of her money, it is exposed for what it is…too little sacrifice for something that is worth sacrificing so much more for.

Dancing Girl cries while I hold her.  She asks if we can pray to Jesus to send clean water and food to her brothers and sisters back in Africa.  What she means by brothers and sisters is all the other children in the orphanage.  And really, in a way, those are her brothers and sisters.  We start to talk about what we can do to be able to send more money.  She pulls away from me with a smile visible, though the tears continue to roll down her cheeks.  She says, “I know: coupons.  We can send them coupons.”  Sweet baby girl!

The truth is that though my little girl does not know it, the poverty in her home country has just reached emergency proportions.  A drought has created a massive food crisis in Ethiopia, Kenya, and Somalia.  The situation is growing worse by the day as refugees from Somalia make the trek into Ethiopia in search of food and better conditions.  Countries already in a poverty crisis have been dealt another blow.  These are the kind of hard truths that I am wrestling with.

All that comes to mind at the moment is the quote “Sometimes I would like to ask God why He allows poverty, famine and injustice in the world when He could do something about it…but I’m afraid He might just ask me the same question.”

I feel convicted to do something to try to find a way to raise money for the people who are living in this famine, for the mothers who are having to decide which kids to feed while I feed my children abundantly.  Any ideas are greatly appreciated (I have nothing left to sell because I donated it to my friend G’s adoption fundraiser, so a Garage Sale is out).  It would be ideal if it was something the kids could help with.