I’m not a huge dessert person. I don’t eat pies or cakes. But apple crisp is something I would eat for breakfast, lunch, supper, snack, desert, or anytime in between! I have perfected my recipe and look forward to fall when apples are in season. 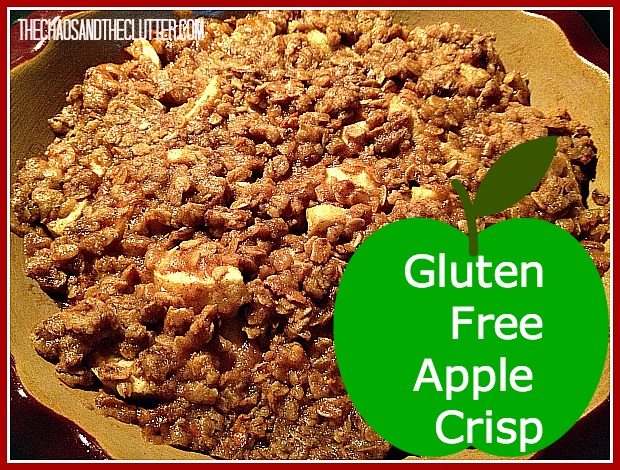 Unfortunately, my delicious apple crisp recipe is not gluten free, so when we had to put Einstein on a gluten free diet a year and a half ago, this was one of the treats he missed out on. I’ve tried a few times to adapt my recipe into a gluten free one but have not had any good results. In fact, the results have been little short of disastrous! Some attempts were inedible, others were mush or burnt while some were just plain gross!

The apples are out on our neighbour’s trees now and they have let us know that we can come and pick them anytime, so I knew that I had to figure out a way to make delicious gluten free apple crisp for my sweet son to enjoy. I was hesitant to try again, but a while back, Udi’s had sent me some of their awesome products to try and one of them caught my eye and I started to build a recipe in my mind around it.

I’m so happy to say that it worked! We all ate delicious gluten free apple crisp today.

1. Peel and slice the apples. I like to use a mixture of different types of apples. I find this gives the apple crisp better taste and more texture. Place apples in bottom of baking pan.

2. In a bowl, mix together all the other ingredients except for the butter and then stir in the melted butter. Sprinkle mixture over the apples.