A perfect vacation in my mind is one where I’m able to read and read and read. At the beginning of November, we went to Mexico to celebrate our 20th Anniversary. I cannot remember another vacation where I was actually finished all of the books I brought with me. This time, I even had to borrow one from the lending library there! It was bliss. 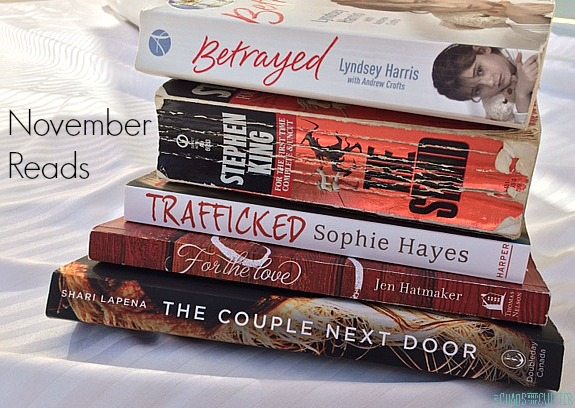 The Stand by Stephen King – I finally finished reading this humongous book. According to my husband, it is a science fiction novel which is surprising because I don’t usually read science fiction. I started reading it on my friend Christie’s recommendation. Loved it. There were parts that dragged on a bit but in general, it was an amazing book. A classic representation of good versus evil written in the way that only Stephen King can write it.

Betrayed by Lindsey Harris – This true story was shocking and unthinkable although I certainly was able to figure out who was ruining this family’s life much sooner than the mother was. I did find the book to be predictable and was somewhat frustrated that the mother couldn’t figure out what was going on but I do know that it’s certainly easier to be on the outside looking in and thinking that it must have been obvious when so many involved did not see the truth so it must have been well hidden.

The Couple Next Door by Shari Lapena – I had heard this book was along the lines of Girl on the Train and Gone Girl in that it is twisty and relational which is what intrigued me. Considering that this is the first novel by Shari Lapena, I was impressed. While I didn’t find it as twisty as the other books it was likened to, I did find it an enjoyable read.

For the Love: Fighting for Grace in a World of Impossible Standards by Jen Hatmaker – I know that there’s currently some controversy surrounding Jen Hatmaker and I have no intention on commenting on that. This book had been recommended to me and it was very thought-provoking.

At first, I’ll admit that I was really bothered by the chapters that seemed out of place in a serious book. There was a chapter making fun of certain fashion trends and I found that strange because it seemed judgmental in a book about showing love and grace. There were other chapters like that as well HOWEVER, after I decided to see them another way, I wasn’t bothered by them anymore. I decided to see them as commercials. Some of the topics in the book were quite heavy so these “commercials” were actually a nice way to infuse some humour and lighten the mood.

I dog-eared the book in many areas that I want to revisit and give more thought to. I already have plans that will increase the weight I put on relationships in my life based on things I read in the book.

Trafficked by Sophie Hayes – Wow. This is the kind of story that changes your paradigms. I will never think of prostitution or human trafficking the same way again. Trafficked is the true story of a girl from the UK, a smart, pretty, well spoken girl from a middle class family, who was trafficked by someone she knew, someone who was her best friend for 4 years. The terror she experienced defies words.