This snack is so easy to make and will likely impress your kids. It may even convince some of your picky eaters to give this healthy option a try! 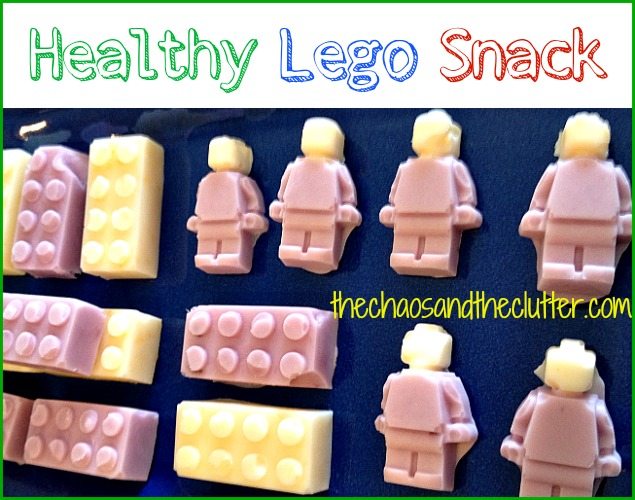 We went to see the Lego movie last week and all of use loved it. We were already big fans of building with Lego but the movie ignited even more Lego fever over here!

Einstein decided pretty much immediately that he wanted to have a Lego theme for his upcoming birthday party so I started thinking about Lego theme foods I could make. I already owned a Lego bricks mould that we regularly use to make ice cubes in but found a similar silicon Lego minifigures mould at the Lego store the other day. Knowing how much we use the Lego brick one, I bought it immediately. I’m already imagining all kinds of treats I can make for the party!

I have made frozen yogourt Lego bricks before using that mould so I decided to try it with the Minifigure mould too. I used mandarin orange yogourt for the heads and black cherry for the rest of the bodies. I wasn’t sure if they would hold together. 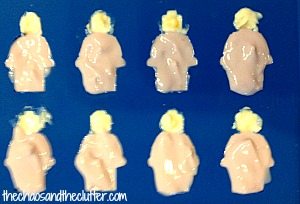 I know that I could have made the colours more true to Lego if I had used plain yogourt and added food colouring or food paste, but I wanted to keep this snack as healthy as possible so I went with the more muted colours that the natural fruit created.

I used the same flavours of yogourt in the Lego brick mould. Once the moulds were filled with yogourt, I put them into the freezer and just a few hours later, we had frozen yogourt Lego bricks and mini figures!

This Lego snack will be a wonderful and healthy addition to Einstein’s Lego theme party in a few weeks and in the meantime, the kids are enjoying eating them just for fun!

If you are looking for other healthy snack options for your kids, you may want to read my list of 100 gluten free snacks or follow my Cooking with Kids Pinterest board.

If you are looking for other Lego ideas (party ideas, Lego education, crafts, and creations), you may want to follow my Lego Pinterest board.