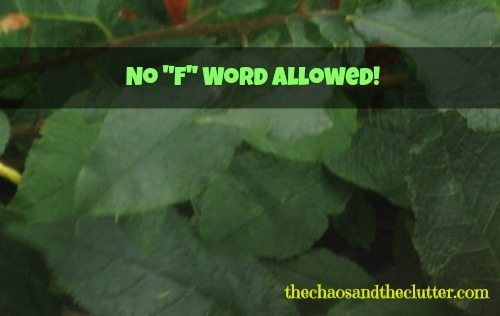 In our house, there are a number of words that are off limits. Taking God’s name in vain tops the list and the kids steer clear of that without any reminders. As the sh*t word has been known to cross my lips when something gets broken or a giant spill happens, I would go pretty easy on the kids if I heard it coming out of their mouths, but for the younger ones at least, it doesn’t.

Then there are the name calling swears…you know the “b” one and the “a” one. These aren’t words our kids ever hear so we don’t have a problem with those around here.

There is one word though that we have been trying for the longest time to get them to stop saying and yet it keeps coming up…the “f” word. I know that they have heard me say it from time to time and it has probably been spoken by The Husband (though much less frequently and only in certain contexts) so maybe I just haven’t been a good role model. I have tried to redirect them, to remind them, to give them alternatives of what they can say instead, but I hear it almost every day. It’s driving me crazy! So we have outlawed it in our house.

From now on, there will be no “f” word spoken here! That goes for me too and it will be a challenge, but I need to be an example that my kids can follow in this. We outlawed it weeks ago and now that it is banned, we do hear it somewhat less frequently, but it still slips in here and there. Some days, I hear it a lot and always in that terrible, high-pitched, whiny type voice. Shudder.

Let me go on record as saying that I hate the “f” word. Hate it. It doesn’t help anyone and in fact, can harm. So come over and join me in the no “f” word movement. Once you try to eliminate it from your vocabulary, you may be surprised to see how often you used it and how negative a habit it is.

Nope it’s not and the sooner my kids start concentrating on what they do have instead of what they don’t, the better off they will be. The same applies to me. Last year was a cruddy year around here and I may have felt like I didn’t deserve some of the things that happened, but that kind of thinking didn’t help me at all. It’s the other kind of thinking that will help me. The kind that doesn’t include that toxic “f” word…”fair”.

So I’m eliminating it from my vocabulary and we have officially banned it from our house. Now when the kids complain, “it’s not fair…”, we respond with something along the lines of “hey, there is no “f” word allowed in this house”! Or if I hear that they are about to go there, I say, “remember we don’t use the “f” word”. It’s working. Slowly.