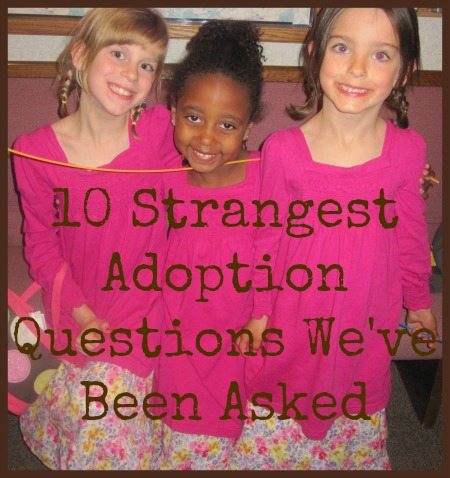 When you are a large, transracial, adoptive, homeschooling, special needs family, you tend to draw some stares and questions when out in public.  Over the years, I keep thinking I’ve heard it all, but new ones come up all the time and some are so absurd that I can hardly keep a straight face.  Here (in no particular order) are the ten most unusual questions I’ve been asked when out with the kids:

1. Are they identical twins?  This one I admit was actually really hard to answer with a straight face.  It was asked of me in an elevator in reference to Miss Optimism and Einstein when they were about a year old.  Yes, they were only two months apart, but they were probably at least ten pounds apart, one was very obviously a girl (she was in a pink dress!) and the other was wearing jeans and a Chicago Bulls jacket, fairly obviously a boy.  But then there is the other visual cue of one being white and the other black!  Though I didn’t laugh and managed to answer, my older son who was was about 8 at the time burst out laughing because even he knew what identical twins were!

2. Why is she brown?  This one happened just last Saturday!  I was out with the girls and talking with the salesperson in the mall.  Just then, Dancing Queen asked me a question, prefaced by “mom”.  The saleslady’s face registered SHOCK and then she turned to me and asked, “She’s yours?”  I answered that all three girls were and thought that would be the end of it but she went on to ask, “why is she brown?”  One of my first thoughts was, “well, that’s one I’ve never heard!”  I know that I could have made a smart comment about the pigment in her skin or about how God chose to make her that way or said that it was because she was born in Africa, but I knew that what she was really asking was how she was mine but with a different skin colour than mine and so I proceeded very positively to tell her about adoption.  (*more about this at the bottom of post)

3. Is this one of the Sunday School classes?  When I was speaking at a local church earlier this year, I brought the younger five kids with me and while we were sitting in one of the pews, a gentleman came up and asked us this.  I found it pretty funny!  It was one of those you-know-you’re-a-big-family-when moments!

4. Are you crazy? Isn’t everyone?!  If by crazy, they mean following God, trying to find joy amidst the chaos, getting the privilege of calling myself mom to many, loving so much it hurts, and taking the road less traveled, then yes, I am and I’m proud of it! 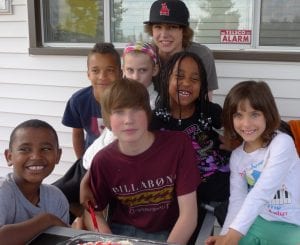 5. Haven’t you figured out what causes that yet?!  I believe that children are a blessing, truly.  I may not always act that way on the hard days, but I still believe it.  I’m assuming the person who asked me this (he wasn’t nice about it either) was saying that our family was too big.  If I ever see him again, I’ll let him know that we added another three after he said that (not just to spite him) and that it’s the best thing we ever did!

6. He’s too old to be having tantrums (tsk, tsk).  This was said loudly in a line-up at a convenience store in front of half a dozen other people.  I know that other special needs moms feel my pain on this one.  When an outburst happens in public, it’s embarrassing enough just to feel the stares and judgement and scrutiny, but a few times, people under the guise of “being helpful” have actually offered advise such as “you really need to put your foot down now or he’ll still be tantrumming in College” or “my kids knew better than that at that age” or “you shouldn’t take them out if you can’t control them”.  I wish I could tell those people what those comments have done to me, how much they have hurt me and made me want to crawl into a hole and disappear.  I know that my son looks “normal” but he has Aspergers and still has the occasional public tantrum…I don’t think it would be fair to him for me to tattoo the diagnosis on his forehead or make him wear it on his t-shirt…he is also in the 90th percentile for height so he is 10, not 14 like he looks.  He has come so far and overcome more in his short life than you will probably ever have to and I am PROUD to be his mom.  This is what I want to say.  What I actually say is usually along the muttered lines of “I’m sorry to have disturbed you.”

7. Do they know they are adopted?  First off, if I’m talking about it right in front of them, I would have to be a pretty bad mom to not have told them before I told you!  Also, several of my kids are a different race than I am and all have good eyesight, so yes, they know they are adopted.  Though three were adopted as babies, one was four when she was adopted and one was seven, so it would have been difficult for them not to know about it.  That is what I am thinking when they ask, but what I actually say is, “It is always best to speak openly to children about their adoption stories.  In our house, adoption is celebrated, but it is not without loss and we talk openly about that as well.”

8. Why didn’t you just have more children of your own?  My first instinct is to correct people and state that ALL my kids are my own, but if I got defensive, they wouldn’t learn the proper terminology for the next time they encounter a similar situation, so I just insert the preferred vocabulary in my answer.  By giving the person terminology such as “biological” and “adoptive”, it usually cues them to use those terms as well.  For a question as personal as this from a stranger, I usually use statistics such as letting them know that there are over 30,000 kids waiting for families in Canada and over 147 MILLION orphans worldwide and then stress that adoption has been an incredible blessing for our family.  My hope is that they will go away from the conversation with the sense that adopted kids are not second-best or lucky to be chosen, but a precious gift, just as all children are.

9. Are you trying to be just like Angelina?  Well, considering that we started our adoption journeys several years before Angelina (Jolie) first adopted, you may want to ask her if she is trying to be just like me!!!  I think it’s great that celebrity adoption helps shine a spotlight on different facets of adoption, but I did not adopt to follow a trend.  In fact, statistically, adoption is on the decline though sadly, children in need of families are not on the decline.  It is a misperception that adoption is on the rise or the latest “fad”.  It also implies that I wasn’t aware of the lifelong commitment before I adopted.  I was and am fully aware.

10. She’s just so cute!  Since you have so many, can I just take her home with me?  My children are not interchangeable.  I have an individual relationship with each one of them.  I know that the person who said this meant it as a compliment to my daughter, but what she didn’t take into account is that that same daughter had actually been taken home by someone else at one point in her life…me!  I had gone to Ethiopia and taken her home with me to Canada, a strange home and country.  We were having a hard enough time convincing our daughter that this family is forever and nothing she could ever do would make us send her anywhere else.  We were taking great pains to work on attachment and having not one, not two, but three different people say something similar to her or in front of her within a few months was extremely detrimental to her attachment and security.  She even had nightmares about one of the ladies coming and stealing her from us.

*I know that many adoptive families resent intrusive questions, but in general, I welcome them.  I feel that this gives me an opportunity to not only plant seeds about adoption in those people and potentially impact the lives of orphans or foster children down the road, but it also gives me the chance to show my children that I am proud to talk about adoption, that it is not something to be ashamed of, and it gives my children the language to be able to answer questions that WILL be asked of them as they get older.  This doesn’t mean that I share with strangers the most intimate details of our children’s adoptions, but when I am open in my answers in a way that still respects my children’s privacy, I often find that people are usually asking for some reason.  Sometimes, a loved one is pursuing adoption or considering adoption.  Other times, it’s something that they have thought of for their own family and in those cases, I often give them my phone number, e-mail, or my adoption website in order to be able to further answer their questions.  I always answer in such a way that I am cognizant that little ears are listening to every word.

I know that my kids are learning from the way I handle these situations.  A few months ago, two of Miss Optimism’s friends were over.  They kept saying things to her about how it’s so sad she’s adopted (to which she replied, “it’s not sad.  I’m glad I’m adopted!”) and then they asked her, “where’s your real mom?”.  She totally knew what they were asking, but she answered, “in the kitchen”.  They said, “no, your REAL mom”, to which she replied, “yeah, I know.  My real mom is in the kitchen making me lunch.”  (I was also listening to the whole conversation considering intervening, but deciding that she was handling it just fine on her own!)  They asked a few more times.  (She later told me that she totally knew what they were asking, but was getting a kick out of it and finding it funny!)  In exasperation, they finally asked, “ok, where is your birth mom?” and she answered with the name of the city her first mom lives in.  They asked a few more invasive questions and she answered, “that’s private and I’d rather not share that”.  This little conversation that I was able to overhear let me know that my decision to take the time to educate strangers about adoption when they ask was the right one for our family.

Being such a noticeably adoptive family, we can be ambassadors for adoption (and homeschooling and large families).  We can show that it is complicated and chaotic, but so worth it! I have also written about what I have found to be the most effective way of answering rude questions.