As one tool towards paying down our debt, I created a Grocery Challenge for myself … to spend only $200 in the month of March to feed our family of 9 by eating primarily from our freezer and pantry. I had inventoried what we had and made a list of meals that I could make with those ingredients.

The month of March was actually a great month because of the challenge. I loved having the list of meals to reference and not having to meal plan for an entire month because it was done ahead of time. It was freeing to have an envelope with $200 in cash that was earmarked for groceries and not have to worry about how much I was spending.

Staying within the budget was much easier than I thought it was going to be. We ate really well and were able to try out some new recipes that will go into our menu box for keeps because they were so good. I found these recipes by googling ingredients that I had on hand.

In any given month, it would be unusual for us to have company over for a meal more than once, but in March, we had company 4 times, including overnight guests here for more than one meal and a house full of people for Einstein’s birthday party, and I was even able to feed the extra people within our given budget!

We did not run out of money and in fact, on the 31st day, I was even able to buy a bottle of wine for the dinner party we were hosting that night and I had money leftover!

I learned a lot as I became very aware of the prices of food and how quickly the small things can add up. I realized that we normally spent a lot of our grocery allotment on snacks and breakfast. 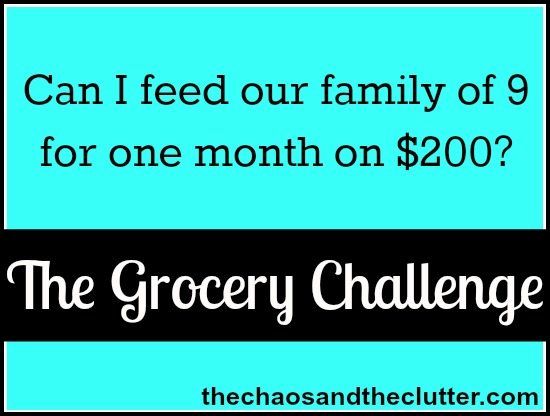 I was able to feed the kids cheaply in the mornings by only offering oatmeal or puffed wheat. This led to another discovery. We have had this giant bag of puffed wheat since the last time I made puffed wheat squares, which was quite a while ago. The kids have always refused to eat it, saying that they don’t like puffed wheat. It was funny to see that after two weeks of oatmeal almost every morning, they were willing to give it a try and really liked it! So I guess I also learnt that I am partly responsible for the kids being as picky as they are. When they don’t have as much selection, they will eat what there is.

I baked a fair bit, including some bread, lots of muffins, a few loaves, and dozens of cookies. One day, I used the last of the cans of pumpkin and made pumpkin soup, pumpkin muffins, and pumpkin cookies…it’s a good thing the kids like pumpkin! I appreciated my treats more. On two occasions, The Husband and I were able to have nachos with all the fixings, which are my guilty pleasure food. Normally, I think nothing of making them at least a few times a week, but with the cost of tortilla chips and cheese, in March, they became a treasured treat!

I am still amazed that we were able to eat as well as we did for only $200 in 31 days. That is less than 72 cents a person per day – UNBELIEVABLE!!! I also realized that we could easily do this once every six months. It felt great to pay down some of our debt with money that normally goes to our groceries, but it also felt good to use up what we had and ensure that nothing got wasted.