Today was a good lesson in learning to trust my instincts as a mom. I’ve had these lessons a number of times over the years. Today, it came in a double dose! Miss Optimism’s lungs have been doing quite well and she has even been permitted (by the doctor) to go outside for at least a month now though at our last doctor’s visit on Monday, her numbers were down considerably and he mentioned that we should start limiting her time outside which we did begin to do. All day today, I could tell that she was a bit “off” but whenever I would ask her how her breathing was or how she was feeling, she would smile and say that she was doing really well (I think it’s because she knows that she’ll have to stay in otherwise). But I insisted that she do her machines more often than usual and I upped the dose on some of her medications and as it turns out, following my gut on this was the right call. Tonight has been a rough night, one that found me contemplating a trip to the emergency room to get her numbers back up. A few hours ago, she was blowing 60 on her peak flow meter (60 is the lowest it measures)! I think we have managed to turn it around a bit and probably largely in part to my upping her meds earlier today, I think we have averted a hospital trip tonight. And thankfully, tonight happens to be a night when we have our night nurse so I may even get a few hours of sleep, but then again, I may not because…

Earlier today, I had to go out to an appointment and my sweet friend G offered to bring her kids here and stay with my kids while I went. While I was gone, Granola Girl who was born climbing trees was up in a tree when the branch she was on broke and she fell and landed on her arm. When I got home, G told me about the incident and Granola Girl was still complaining but she had full range of motion and was playing with the other kids. After G left, Granola Girl continued to complain about her arm for hours though she wasn’t favouring the other one and continued to play here and there. I tried several things to distract her and the arm kept being brought up. Something just didn’t sit right about it.

I was actually at the point of convincing myself what a waste of my time and the clinic’s time it would be to take her in. I was so behind already. The Husband was working late and Fred was at work so I had no one to leave the other kids with. I hadn’t made supper yet. It seemed ridiculous to take her in for something she wasn’t even crying about. But…

I just knew. I knew it was broken. It looked fine. It wasn’t swollen. It wasn’t bruised. She could move it in every direction and yet I called my mom and asked if I could drop the other kids at her place because I had to take Granola Girl in because her arm was broken. I just knew.

We got to the clinic and waited for hours and several times, I almost talked myself into leaving. The other kids still needed to be picked up from my mom’s, it was past bedtime, I was hungry, I didn’t want the embarrassment of them telling me I had overreacted. The examining doctor was very nice and thorough but when he did his exam, Granola Girl only mildly flinched when raising that arm over her head, didn’t wince at all for any of the other movements, and when he pushed into the exact spot that she said was hurting the most, she only said “that hurts a bit”. He obviously thought it would be a waste of time (and money) to send her for an x-ray. I told him “It’s broken. I know she can move it and doesn’t seem in pain but though she is our most dramatic kid, she is also one of our toughest and something just isn’t right”. He sent us for x-ray. (He later told me he was totally sure it wasn’t broken.)

Y’all know where this is going right?! When he called us in to look at the x-rays, he told me he was amazed. He said that it was one heck of a break and she is one heck of a tough kid. She broke her humerus up near the growth plate which is not yet closed so it is a bit complicated. Not good. For tonight, she is just in a sling and on pain relievers, but next week we will be going in to Pediatric Ortho at the closest Children’s Hospital and they will decide what they are going to do. 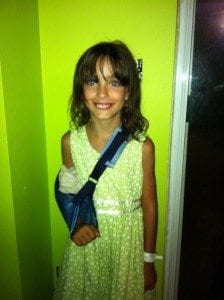 The moral of the story is for all those mothers out there…listen to your momma instincts. I believe that God put those in us as an extra protection for our kids. I am so glad on both counts that I listened to mine today.