In the first part of this series, I looked at very specific ways that Pinterest can enhance the homeschooling experience and the second part looked at how it can be used to help you in your home.

Pinterest is a wonderful thing. Truly, it can be helpful and inspiring and informative, but in order to use it effectively, you need to avoid the pitfalls.

1. Pinning the Main Site instead of the Specific Post – This is an easy mistake to make, but will cost you a lot of time in trying to find the project or recipe later if you need to search through a year or more’s worth of archives.

2. Feeling Inadequate – Pinterest is so full of amazing pictures of cakes that look like they were decorated by professionals (and some of them were!), home decor worthy of magazine publication, crafts that could have been made by Martha, recipes by “home cooks” that would do a 5 star restaurant proud, and more. It’s hard not to feel like everyone else is doing it better than you are, that their homes are more organized, their children better behaved, their food tastier, their projects prettier. It’s important to remember that people are not “pinning” the photos of messy living rooms, tantrumming kids, failed diy projects, botched cooking attempts, sloppy cake decorating, and flopped party ideas. Everyone has their strengths and their weaknesses. Instead of allowing someone’s strengths to make you feel inadequate, use them as inspiration for you to put your own unique spin on their idea and be yourself.

3. Not Actually Making what you Pin – It’s easy to pin, more difficult to actually follow through and try out these fun projects and ideas. I was finding this was true for many of my pins. Though when I was pinning things specific to a homeschool theme I would tend to make many of the projects, for other things such as recipes, I was mostly a couch pinner! I sat and pinned, but did little in the way of making! To give myself more incentive to make things, I made a special board called “Pinterest Recipes I’ve Actually Made”. I repin things that I’ve made to this board along with adding a comment about what we liked or didn’t like about it and anything I’d change if I make it again. 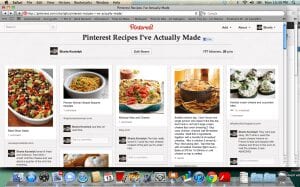 4. Pinterest Perfection – I don’t know about you, but my attempts to recreate what I’ve seen on Pinterest don’t usually turn out the way the pictures look! It can be discouraging. I have to remind myself why I used the idea in the first place. If it was a craft project, did the kids have fun? If it was a party planning idea, did the party guests complain that my attempts did not match what they had seen on Pinterest or did they just enjoy their time? When I focus on the reality that it’s better to do something than not try because the results won’t be perfect.

5. It’s not a Competition! – Similar to the pitfall of Pinterest Perfection, turning Pinterest into a competition is a lose-lose scenario. The trick to not falling into the competition trap is to make it for your own enjoyment. Pinterest can enhance homeschooling for your kids, help you to organize your home, branch out your recipe repertoire, and learn from the talents of others. Allow it to do that for you!