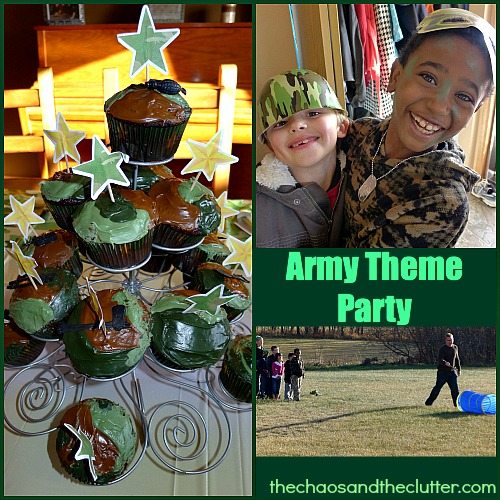 A few week’s ago, we had a birthday party for Snuggle Puppy. I am still a bit confused as to why he wanted an army theme, as it is not something he is interested in in the least, but it was easy to plan.

Food. I planned the food around what Snuggle Puppy likes, so it wasn’t your typical kid food. He likes ethnic food, so I served samosas, pakoras, and bahajis. He is a fan of seafood, so I made crab rangoons. I also made a few other appetizers and veggies.

Instead of cake, I made cupcakes in camouflage wrappers and The Husband and I iced them with three different colours to make them look like camouflage. I added little plastic walkie talkies and other army related items to the tops of some and flags to others. 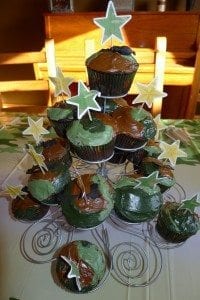 We had a small cupcake mishap, so there weren’t as many in the end as there had been when we iced them, but there were enough to go around!

Activities. Our daughter, Miss Optimism set up a face painting station and gave willing party guests camouflage faces. Fred and The Husband set up an obstacle course in the backyard and once guests were settled, The Husband put them through “basic training” on the course. 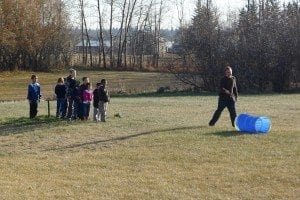 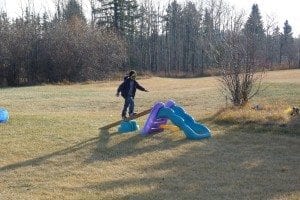 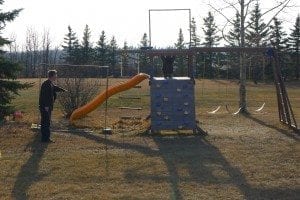 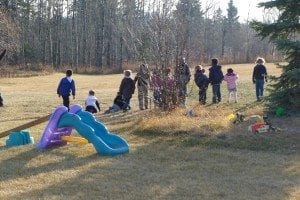 I don’t remember the course exactly, but one at a time, they had to run over, crawl through the tunnel, go up the balance beam, down the slide, over to the climbing wall where they went up that, down something to the other side, through another tunnel, crab walk quite far to the finish where they rode a little car down a ramp.  When everyone was finished the obstacle course (complete with The Husband barking orders at them like a drill sergeant would), they all did a running race. Once their training was complete, they were made honorary soldiers.

Now that they were soldiers, they were given their first mission: to rescue their fellow soldiers who were MIA. Fred had hidden dozens of plastic soldiers in our trees. The kids all enjoyed finding the army men. They were each able to keep any they found.

I also had put some toy army men in two clear plastic cups that I had taped together. The kids could then guess how many army men were in the cups. The one that came the closest got to keep all of them. I forgot to take pictures of these last two activities.

Extras. When party guests first arrived, they were given hats and dog tags that had a place to write their name and rank.  For party favours, each guest was sent home with a bag containing army related items such as plastic compass, binoculars, activity map, soldiers, parachute men, and a few candies in camouflage bags. 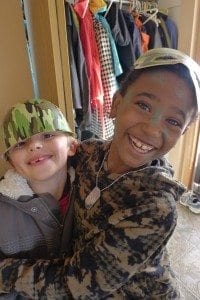 a picture of the happy birthday boy with his cousin K. We were blessed with good weather and a great turnout. It was a very fun day!!!