Mother’s Day is the one day of the year that I kind of expect that I’ll get to sleep in. It doesn’t always work out, but now that the kids are older, I thought that for sure this year it would happen. That morning, I woke up to the sound of “mommy”. There was a catch in her voice, that little signal that as a mom, lets you know that something is wrong.

I sat up. I knew that there would be no sleeping in this Mother’s Day or going back to sleep. My sixteen year old daughter was standing by my bed. She looked uncertain. 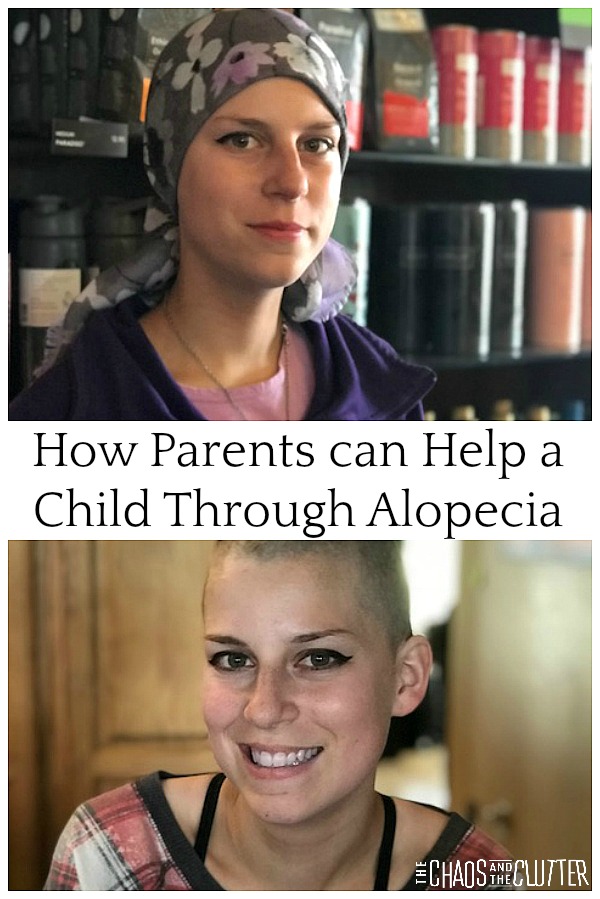 “Mom, I don’t know what’s happening. I woke up and half of my top eyelashes are just gone.”

I looked at her. Sure enough, from the middle out on both sides, her eyelashes were missing. It was like they had been stolen in the night.

“Alopecia.” The word was immediately in my head. I didn’t dare say it out loud.

This was my daughter who had already overcome so many obstacles in her life, who had faced challenges before she was even born, who had battled lung disease, who had spent years in and out of the hospital, who had watched as her siblings played outside while she had to stay in, who had painful medical procedures and still goes for regular injections. How could this be happening to her?

My brain went into “it’s not fair” mode pretty quickly. I know that it’s just hair, but she’s a teenage girl and that’s hard enough without something that sets you apart. Part of me wanted to scream. I didn’t say any of these things to her.

I told her that everything would be okay. Next, I asked if she had used different mascara recently. I advised her to stop wearing makeup until we could figure out what was happening. An appointment was made with the doctor. But I knew.

Over the next few days, her eyebrows began to thin out. Within a week, she had lost the top and bottom eyelashes on both eyes. It was no surprise when the doctor confirmed what I had suspected. She had Alopecia.

He told us that in some people, they will just lose their eyelashes or eyebrows and not their head hair, so we were hopeful for that.

13 days after that Mother’s Day morning, my daughter was once again standing at my bedside. This time, tears were streaming down her face. She had woken up to a pillow covered in hair. About a third of her hair had fallen out.

She climbed into bed with us and we all cried together. I was rocking her while she cried with her head on my shoulder. When she pulled away, there was a thick patch of hair where her head had been. We all looked at it. I wasn’t sure if I should keep the hair or throw it in the garbage. At first, we started to cry harder until we burst into laughter.  There’s no protocol for this one in the parenting books!

I’m so proud of my girl. An hour after we cried in my bedroom, I dropped her off at her swim instructor practicum. Even though she was embarrassed about her lopsided, strange looking hair, she knew she had a commitment to keep.

Here’s where the hard mom stuff comes in though. Part of me wanted to tell her that it was okay to call in sick that day, to stay home, to hide away while she adjusted to the idea. I was hurting for her. I worried that she would encounter stares and harsh words. As a mom, I wanted to protect her from it.

She is, of course beautiful with or without hair, but losing your hair and your eyelashes when you’re sixteen is just plain hard.

We went to a wig shop a few days after she started to lose her hair. The ladies there were all bald as well. It was wonderful for my daughter to be able to talk to others who understood. They were so kind to us.

In the end, she decided to hold off on getting a wig for now, but did get a special hat because we discovered that you get very cold at night when you don’t have hair on your head.

Each day, she lost more hair in clumps. Bald patches began to join each other to form larger bald patches. That Friday, we sat in my kitchen while my dear childhood friend who’s a hairdresser shaved off the small bit of hair remaining. It was emotional. 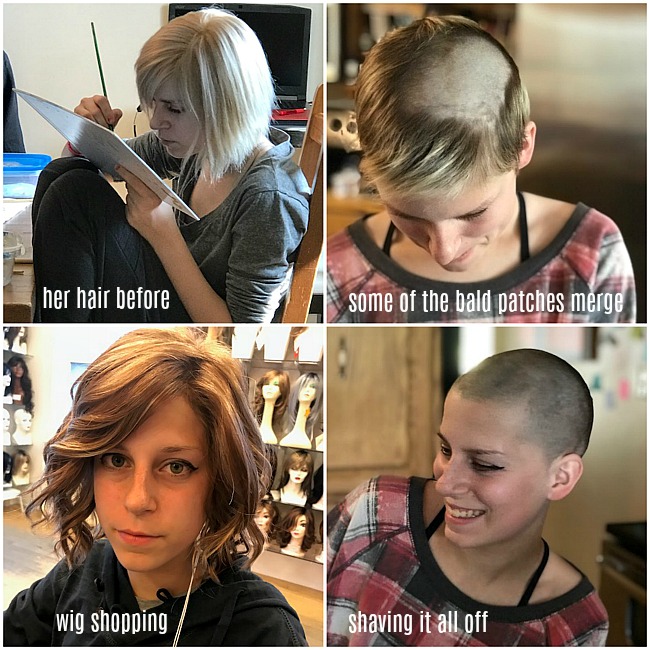 Again, I know it’s just hair. I have close friends who’ve lost their hair from cancer treatments and Alopecia is not life threatening.

I have perspective and my daughter does too. She knows that there are worse things that she could lost. After all, her youngest sister lost her hearing a few years ago. Last year, her best friend lost her mom.

We remind ourselves about these type of things to keep our perspective. We have also allowed for the natural grieving because keeping perspective doesn’t mean that we can’t still acknowledge the hard.

But it’s still hard. There have been lots of hard moments. Her first time being around her friends without a hat. Being on a youth group outing and having to decide if she was brave enough to take her scarf off so she could waterski. Learning to apply eyeliner in a certain way so that no one can tell that she doesn’t have eyelashes. Attending a wedding. Feeling ugly. Wanting to be like the other girls her age.

I’m incredibly proud of how she has handled it. Overall, she has been optimistic and kept a sense of humour. She has been an example to me and to her siblings of courage and grace.

I asked her if she was okay with me sharing this story here on the internet for everyone to see and she agreed immediately. It understandably took her a few extra minutes to agree to having the pictures shared.

She hopes that in sharing what this journey through Alopecia has been like, I might be able to help other moms better support their kids through it.

With that in mind, my daughter asked me to share the things that I did that she found helpful. She wants other moms to know what to do if this happens to their child.

Helpful tips for parents of kids with Alopecia:

My daughter’s hair grew back, but a few months later, her eyelashes started to fall out again. We know that it will likely be something she battles throughout her life. She had an easier time the second time because she knew that she had new coping skills for facing it again.

If you or your child are facing Alopecia, know that you are not alone. You will get through this.