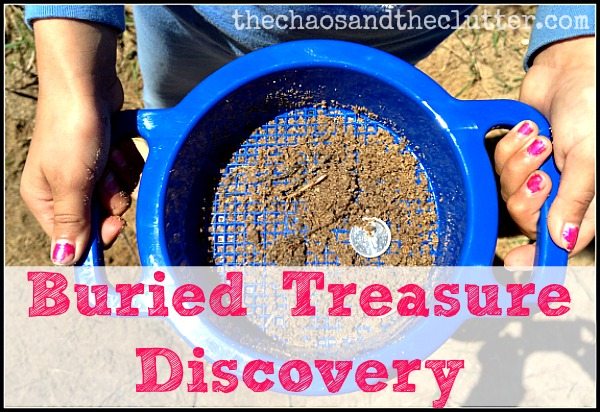 This is something that I’ve had planned for awhile. It’s even something I put in my Summer Bucket List. This is the one thing in this 5 Days of Summer Sensory Activities that did cost more than a few dollars. I went to the bank and bought a roll of quarters ($10) and a roll of nickels ($2) and hid them in our sand pile. If you don’t have a sandpile, a box of rice or dried lentils would work just as well.

I then let the kids dig and sift to their hearts’ content but I made it clear beforehand that all money found would be pooled at the end and divided equally among them so that there wouldn’t be any fighting. Another idea I had that would work well for a traditional sandbox would be to rope off sections using ribbon or tape and assign each child a section, being sure to put equal amounts of money in each section. Or of course, you could divide up the money beforehand, hiding it one bit at a time and letting the kids search one at a time but that would take far too much time in my opinion and may lead to complications if one child weren’t able to find all of his treasure.

It’s obvious that we have had fighting occur with things like this in the past since you can tell that I’ve put quite a lot of time into thinking about that aspect of it! If you are the parent of an only child or children that never squabble, it’s lucky that you won’t have to make those considerations!

I have to say that it was pretty fun watching them explore and find the coins. I’m glad that I did this with actual money. In the past, I’ve done treasure hunts with pretend coins and it’s still really fun for them but this was such an unexpected surprise that they could hardly believe it! They talked about what they would do with all their riches afterwards! 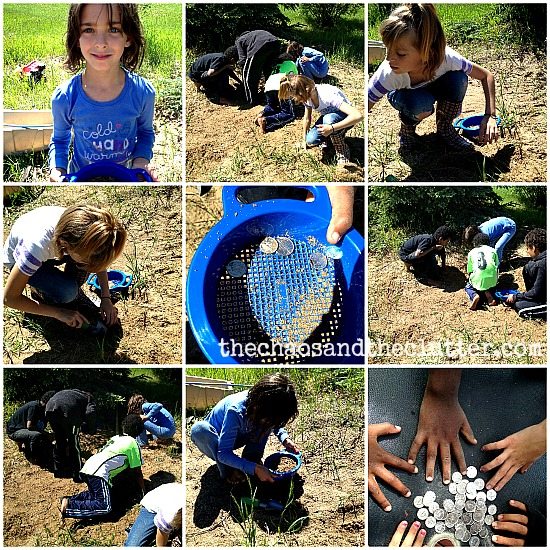