I like planning parties at the best of times, but I have to say that this one was especially fun to do! The only negative was that due to Pinterest, there were so many ideas I wanted to incorporate that it was hard to settle on what I could accomplish in the time I had! 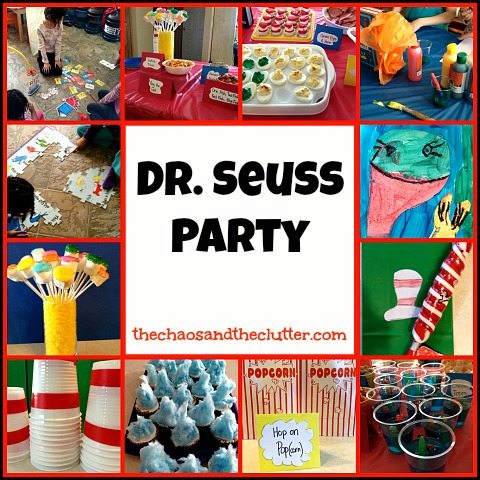 For all the food, the kids made little signs out of old file folders and white paper. 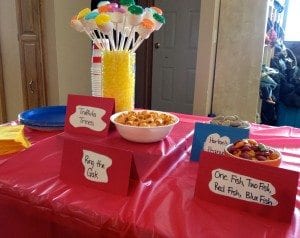 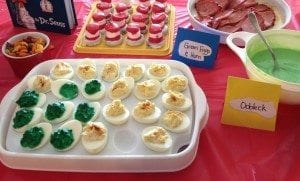 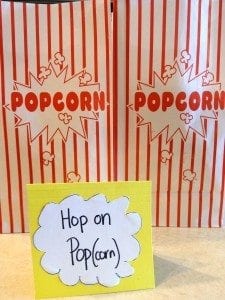 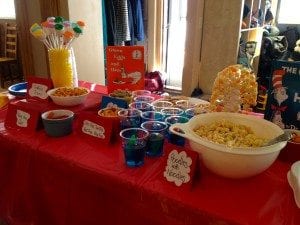 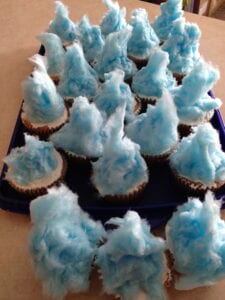 I used the box from a book set and filled it with bright tissue paper for the centerpiece on the craft table. I stood Dr. Seuss books up here and there throughout the main party rooms. I chose to use primary colours and keep the decorations simple instead of using actual Dr. Seuss decor. We made Cat in the Hat cups by putting red electrical tape that we bought at the dollar store around white cups. 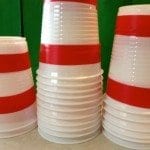 Also because some of the food was so brightly coloured, it served as decoration too.

Miss Optimism drew this awesome Gak on poster board and we put a large water bottle behind it so that the kids could use rings to “ring the Gak” like it talks about in the book “One Fish, Two Fish, Red Fish, Blue Fish”. 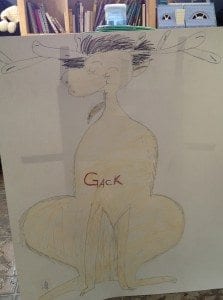 We also had a Dr. Seuss puzzle for the kids to do. 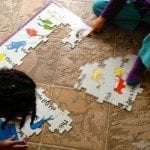 Michelle organized a craft for the kids based on One Fish, Two Fish where they painted a background on one paper, set it aside for it to dry, drew a big fish with a pastel, painted over the fish, waited for that to dry, cut the fish out, and glue it on the background they made. They turned out so well! 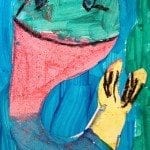 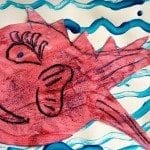 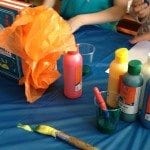 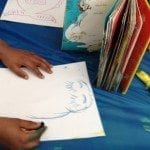 I had planned on having the kids making Truffula tree pencils using pencils and bright feather boas I got at the dollar store but it didn’t happen.

The kids also played a Cat in the Hat game. The younger kids liked it. It seemed to have just about the right amount of silly! 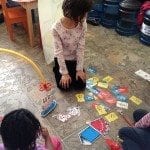 My kids decorated green bags and I filled each one with these great lollipops I bought at Bulk Barn. They just screamed “Dr. Seuss” to me and because they were considered Valentine’s stock, they were at clearance prices. I also put in some Swedish Fish and a Dr. Seuss bookmark.

This party was a great way to celebrate Dr. Seuss’ birthday week! Earlier in the week, the kids also did a Dr. Seuss Writing Activity, ate their fun Dr. Seuss themed muffin tin meal, and played a Hop on Pop Sight Words game that they loved.

For more ideas, you can also check out my Dr. Seuss Pinterest board. 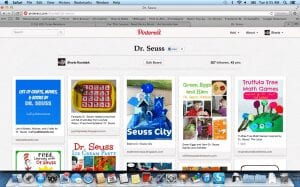