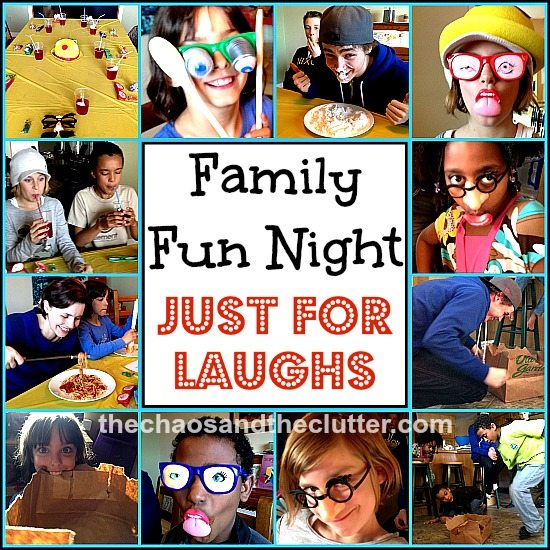 Our family fun nights are such a huge hit with the kids! They are great for encouraging bonding and for creating lasting memories. We’ve had quite a number of Family Fun Nights over the years and I never thought any I could create would ever top our Minute to Win It Family Fun Night, but I was wrong! This one was even more fun and got us all laughing. It also was about half the work to prepare!

Most of this fun night can be put together with things you already have around the house. There are a few extras that I bought that added to the goofiness factor, but the activities could be done without spending any money.

Decorations. I used a bright plastic tablecloth that I could easily wrap all the garbage in and throw out at the end of the night. I knew that the activities were messy and it was worth it to buy the tablecloth to avoid the clean-up!

For the centerpiece, I used a clown hat and a whoopee cushion. They both got a fair amount of use later in the evening and in the days to come! 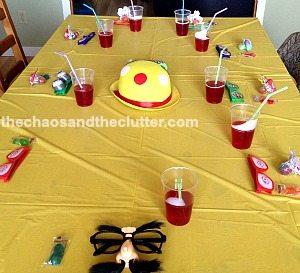 I also set lip pops and goofy glasses at each place setting and set out a trick drink for everyone (I explain how to make those below). 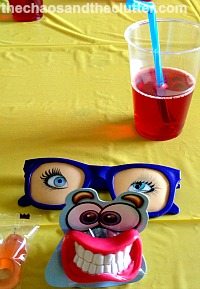 For The Husband, I set out a really funny pair of glasses with wind-up moving eyebrows and moustache. We also gave The Husband stick-on sideburns! The funniest part was that his hair is so light so the black sideburns looked really out of place! 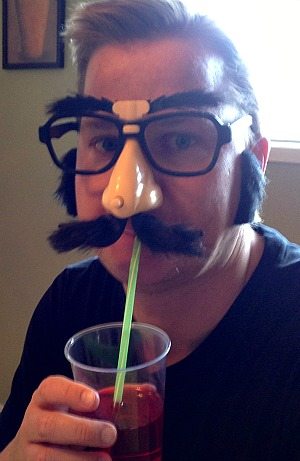 Food. I made trick drinks by filling clear plastic cups with red jello and inserting a bendy straw into each before the jello set. They look just like juice ready to drink and they fooled almost everyone! They tried awfully hard to suck up their juice. 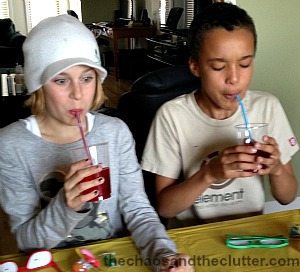 I made coloured popcorn for a snack but it was a flop. I followed the recipe but it was a soggy ball of yuck!

For supper, I made spaghetti because I needed a messy meal to pull off the next activity…

Activities. I put all of these utensils in a bag: 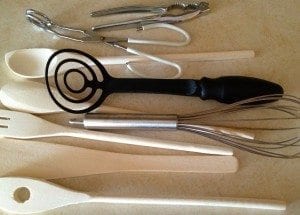 I then wrote silly names on index cards like “the Forkinator”, “Whirlwind”, “Double Trouble” that pertained to each one. When I read the names, people chose the one they wanted and I reached into the bag and handed them the utensil they had to eat supper with! In other words, there were no forks at dinner. Everyone had to eat their spaghetti with their utensil. 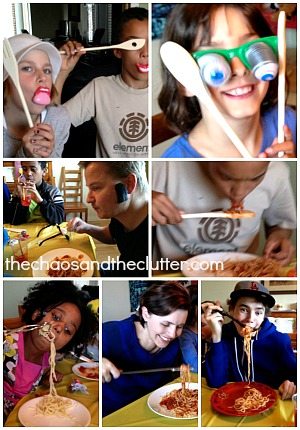 The Flour Game. This game is perfect for playing with a group with wide age ranges. Toddlers could play and so could grandparents, so it would be great for family reunions or holiday parties.

All you need for this is flour, a bowl, a lifesaver or coin and knife.

Pack a bowl with flour. Stick a plate on top of the bowl and carefully tip it upside-down so that you create a mound of flour. Put a lifesaver (or coin) on the top. Everyone takes a turn cutting the flour until the lifesaver falls. The person that knocks the lifesaver off has to retrieve it with their mouth. 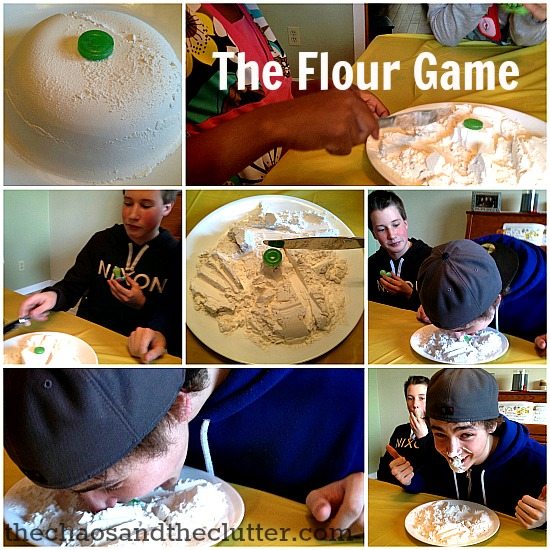 The Bag Game. My neighbour Christie taught us this fun game. This time we played it with a bit of a variation though. For the bag game, all you need is a large brown paper bag (or you can use an empty cereal box) and a willingness to play.

Standing on one foot, you must retrieve the bag with your mouth. You then have to tear off the bit of the bag that your mouth touched so that slowly, the bag gets lower and lower to the ground. Since we have a variety of ages in our family, we gave the littlest ones three strikes per turn and the rest of us had three strikes that carried through from round to round. After a long and hilarious competition, Einstein came out victorious! 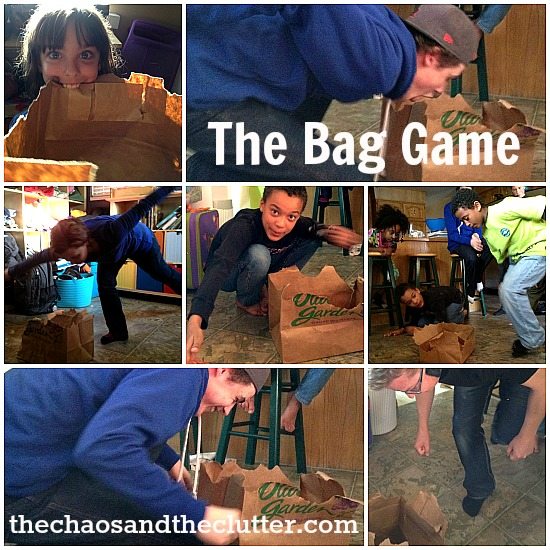 Extras. I had made some videos on JibJab starring members of our family and we sat down and watched the videos and laughed as comedic versions of ourselves danced, skied, sung, and rollerskated on the screen! I gave everyone funny glasses (with attached noses) to watch the videos with. After we tucked the younger kids into bed, we played a card game (Canasta) with The Ferrari and Fred and had some more laughs.

If you are looking for other ideas of things to do to create those lasting memories, here are some of our other family fun nights: