I had managed to hold it together through the past year. Or at least that’s what I was letting myself and those around me believe.

I held it together when the pandemic hit right as our youngest daughter was beginning to make progress in her mental health treatment program and the program was shut down and she lost all the progress she had made and regressed even further.

I held it together when a rotator cuff injury made everyday tasks hard for me to complete. I found work-arounds and smiled through the pain, unable to even sleep most nights.

I held it together when the phone call came from the genetic clinic that our youngest daughter’s hearing loss would progress to the point of complete deafness. They had found two genetic markers, one would have been akin to a lightning strike. Two? Unheard of. But she had them both.

I could only sigh. Of course she did.

I held it together when my husband needed surgery for a cyst that had eaten through most of his jaw bone on one side. I held my breath waiting for the results of the biopsy and was thankful when it was not cancer, but couldn’t take a minute to enjoy the moment because my kids were hurting and needed me.

I held it together when one of our teens went off the rails and for months, I walked around with that horrible pit in my stomach, worried for their life, never able to relax, and constantly wondering if there had been something I could have done to have prevented it.

I held it together when I held my babies as they cried over the racism they have experienced and shared how affected they were by everything in the news.

I held it together when in August, our middle daughter inexplicably was suddenly stricken with severe motor and verbal tics that took over her body and her life. I had to. I had to be the one to advocate and fight for her.

I had to be the one to fix it. She needed me.

For months I took her to specialists and doctors and naturopaths and chiropractors and hospitals. Spent hours after she was finally asleep each day researching. Day after day of holding her as she cried while her body was wracked with violent tics every single second. I begged for answers, for treatment, for something.

They ran test after test and we were still without answers and then finally, after I insisted they try a treatment for what I suspected it was… a diagnosis.

Treatments began. Symptoms faded and I thought that maybe I could breathe. I felt hope for the first time in months. And then another infection sent all the symptoms into hyperdrive and it felt like we were back where we started from.

But while all that was going on, I still had so many other kids who needed me, who had crises or needs of their own.

And I pushed through.

I felt the waves of grief coming and I ignored them.

I didn’t have time for that.

I was busy mama bearing 🐻  for my daughters. Advocating for my youngest daughter to have her learning needs met and her mental health needs met, advocating at the school for my son’s learning disabilities and his needs, advocating for my oldest daughter’s health (by this time, she had been taken one Saturday by ambulance from her work to the hospital for fainting spells and we were searching for answers for that as it kept happening).

I think you can see where this is going to end up.

I tell others how important self-care is, but I didn’t feel that I had time or enough energy left to do what I needed for me. What I needed was an actual break, like a break for my brain where no new crises came in and no one needed me. And I couldn’t seem to make that happen. 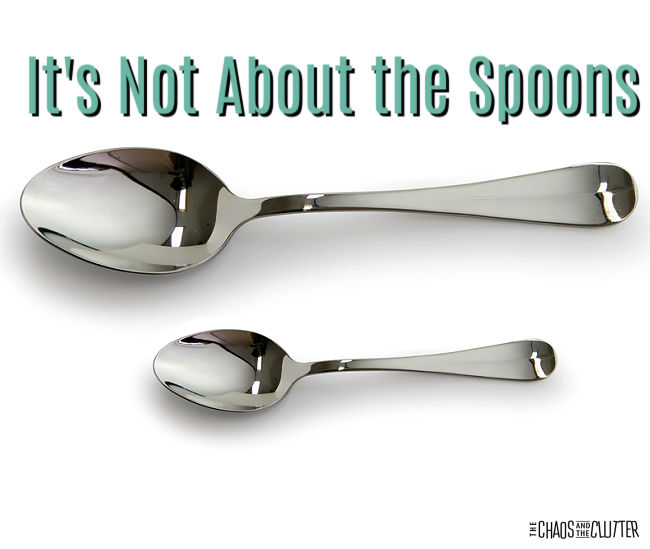 So I lost it about spoons.

You see, there was no one to get angry at about the unfairness of our daughter’s tics. No one to yell at about our other daughter going deaf or our other daughter losing her hair and having health issues. Who could I blame for the pandemic that had made all these things worse by our isolation?

So it was the spoons.

I used to have complete sets of cutlery, but over the years, my small spoons kept disappearing. I suspect it was kids and a certain husband who took them to school or field trips or work in their lunches and didn’t return them. Whatever the cause, I had plenty of large spoons, but my small spoons dwindled down further and further until there was only one left.

One day, I decided that I really wanted small spoons to stir my tea and I treated myself to ordering new ones. I ordered 10 small spoons. To “earn” them, I had set myself a goal to achieve at work and once I had pushed forward and accomplished that, I rewarded myself by ordering my spoons.

They arrived in the mail a few weeks later and I eagerly opened the box and was greeted with 10 large spoons.

I was so frustrated and disappointed.

I emailed the company right away and they didn’t reply. The next day, I emailed their customer service department again and crickets. So I called them and was sent to an answering machine. I left a message. Nothing.

I sent another email. No reply.

By now, I had convinced myself that no reputable company nowadays is really that bad at customer service so perhaps I had ordered the wrong spoons. My logic said that “dessert spoons” are the small ones and that’s what I ordered, but maybe I had it wrong.

So I somehow thought it would be a good idea to order the other spoons, the “dinner spoons” since if the dessert spoons were large, that must mean the dinner ones would be small.

And not finding anywhere else that sold those same spoons, I ordered from the same company (you know, the one with the terrible customer service).

I know that you might be shaking your head. But keep in mind that I have been sleep deprived for months and my brain is no longer firing on full cylinders.

A few weeks later, I opened the box that arrived and peered inside only to find 10 more of the identical spoons they had sent the time before.

I now have 36 large spoons and 1 small spoon.

According to their website, I will have to pay the shipping if I want to return them (even though they obviously made a mistake and shipped me the wrong spoons). I have now paid twice for spoons I already had and didn’t need more of.

I still cannot stir my tea with a lovely small spoon.

And this. This spoon thing is the thing that has made it so that I am no longer holding it together.

In the past day, I have cried, screamed, and not gotten out of my pyjamas. I have eaten chocolate and cried some more. Over spoons.

Why am I sharing this with you?

Because I think this is something that moms of special needs kids sometimes do. We push ourselves and we do all the things we need to do until we just can’t do it anymore.

And that thing that sends us over the edge? It’s never the diagnosis or the bills or the medications or the work or the appointments. It’s some small thing that is seemingly nothing.

I think in this case, the company not responding to me and not giving me back my money represents the unfairness and injustice I have felt this past year.

The spoons themselves represent something I want (health for my children) that no matter how hard I try, I cannot have and cannot find a way to get.

And so, I’m going to sit here and cry over the spoons. I may even in a moment I’ll likely regret later, call the company out on Twitter. I’m still debating that. I’m going to send them one last email before I resort to publicly saying their name.

Because it’s not really about the spoons.

When we special needs parents have our breaking point about something seemingly insignificant, it’s about all the other things, the real things, the things we can’t actually break down about.

If you’re the parent of a child who’s struggling, maybe you can relate to being able to hold it together for all the hard things and then breaking down over seemingly nothing.

I know I’m supposed to end this with some words of wisdom that can encourage you and tell you where to go from here, but I’m going to be honest. I’m still in it.

The Waves of Grief in Special Needs Parenting 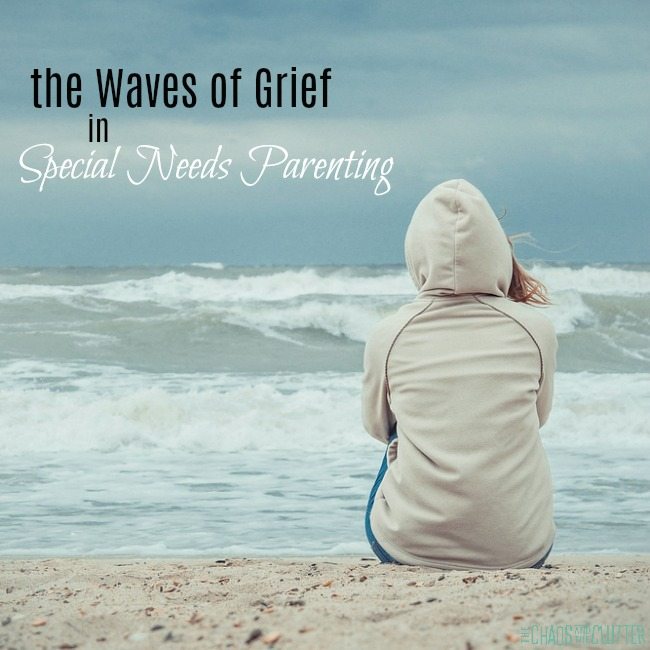 Parenting Myth: You are Only as Happy as Your Saddest Child 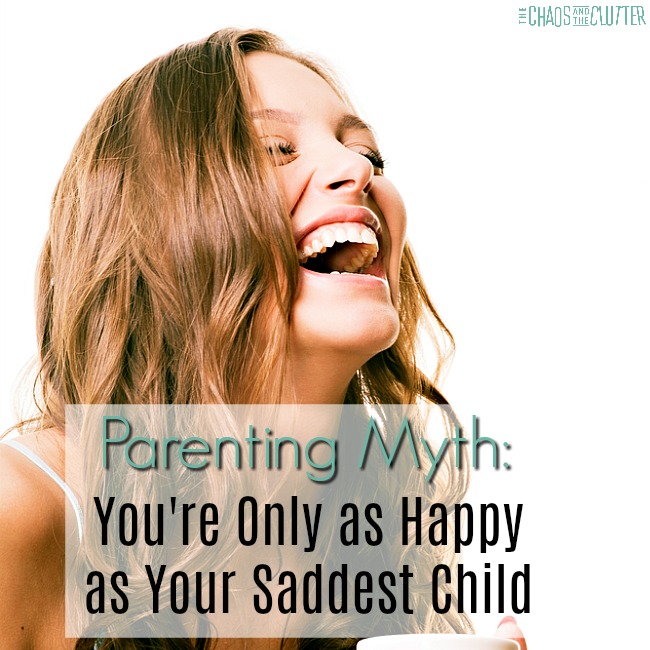