This is an article that is heavy for me to write and it is also scary for me to write. I expect that there may be negative comments and I may even lose readers. I’m not happy about those possibilities, but I’m prepared for them. I’m writing this in case there is even one parent out there who either is struggling to make this decision or who already has and is guilt-ridden with their choice. If I help one of those parents in sharing our story, the negative consequences will be worth it. 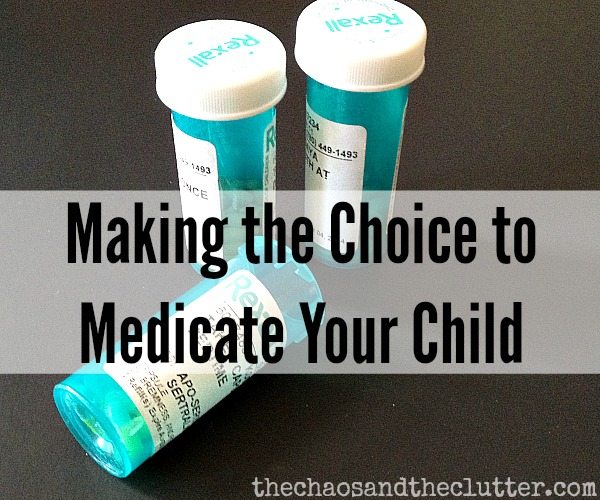 If your child has diabetes that needs to be controlled by insulin, that choice is an obvious one. Our oldest daughter has a lung disease. The medication she needs has side effects, but it keeps her alive , so that choice has never been a difficult one.

I’m choosing to share parts of our story but I’m also choosing to leave out the worst details, details those of you without children like mine cannot fathom, things you’ve likely never considered. Leaving out those details is a bit of a catch 22. If I shared those details with you, there is little doubt that you would better understand my position and be supportive. But if I shared those details, I would be sharing private things about one or more of my children that could follow them around for the rest of their life because the internet is wide-reaching. I’m choosing a bit of a middle ground…sharing enough that those who do have children like mine will likely be able to read between the lines and feel understood but leaving out enough to protect my kids.

Our story begins many years ago with the birth of our two relatively healthy boys and then ventures down our path to the adoption of five more children, all of whom have special needs. Our oldest boys had no special needs other than one having dyslexia.

At that point, medicating a child wasn’t something I considered except perhaps to silently judge the parents who chose Ritalin and other such “needless” and “overprescribed” medications. It was easy for me to judge because I had never been in those parent’s shoes.

Upon the diagnosis of some of our adopted children and the onset of difficult behaviours related to their diagnoses which included such things as SPD (sensory processing disorder), ADHD, Aspergers, and a neurodevelopmental disorder (FASD), suddenly medicating for behaviours was something we were being asked to consider.

I saw medication as a last resort and even when doctors suggested that we might want to consider it for one of our kids, ultimately, we decided against it, reasoning that we could try other interventions. Thanks to educating ourselves on sensory issues, making changes to their environment and homeschooling, we were able to avoid medication. I felt quite proud that we weren’t one of “those families”.

Fast forward a few years to when our son’s Aspergers traits were becoming more pronounced…he was struggling and so were we. I still saw medication as a last resort and researched other ideas. We chose to try putting him on a gluten free diet and the results have been remarkable! Once again, we were able to avoid medicating.

Another one of our children was beginning to display challenging behaviours that took over our home life. This child was eventually diagnosed with PTSD (post traumatic stress disorder), RAD (reactive attachment disorder) and anxiety disorder. By the time we had a diagnosis and a team of specialists, we were at the end of ourselves and so was she. I couldn’t even recognize the child she had become. She never smiled anymore or got any enjoyment out of anything.

Her anxiety was so high that she was barely able to function in day to day tasks and was completely unable to access her brain for learning. The behaviours were holding our family hostage. We were all suffering. She was suffering. It was a terrible feeling to see one of my kids in so much pain and to be unable to help her. Nothing we tried worked. Therapy made things worse.

I got to the point where I was willing to medicate her. The Husband wasn’t yet in agreement. I resorted to videotaping a 20 minute period of what the days with her were really like to show only to him. Once he saw it, he was on board with doing whatever it took to get her the help she needed. Even once we were both on the same page, it still wasn’t easy to follow through with it.

I second guessed myself a thousand times. We started with just giving her something to help her sleep, hoping that some solid sleep would help. It wasn’t enough. Within a month of that, she was on a total of 3 medications. The first time I went to the pharmacy to pick them up, I felt sick. I was embarrassed. I worried that the pharmacist would judge us for putting a child so young on those types of medications. (As an aside, I have felt judgement from some of the pharmacists at times but I tell myself that they don’t know her story or ours and that helps me.)

After I gave her her pills for the first time, I went to my room and cried. I felt like I had failed. Failed her. Failed at being a mom.

And then, three days later, I saw her smile. The day after that, I was in the kitchen and I heard an unfamiliar sound in the homeschool room. I rushed around the corner, holding my breath, hoping it was what I thought it was. It was. It was her giggle. It had been eight months since I had heard her laugh. She was back. Our daughter was back!

It’s been a little over a year since we made the decision to medicate our daughter. We haven’t had to increase any of the medications. She has had the side effect of weight gain which I worry will become a self-esteem issue for her.

Our goal is to be able to teach her through education and therapy how to control her anxiety and behaviour issues on her own and eventually come off the medication.

We still do whatever we can using natural means such as the anti-anxiety kit I created for her which includes some natural remedies and by creating sensory outlets for her such as sensory bins. We also took her through a year long treatment program for attachment and trauma and she is in ongoing therapy.

Making the choice to medicate your child for behaviour or mental health issues is not one that should be taken lightly. You will want to ask the doctor questions such as:

I would also highly advise that you ensure that you and your spouse are on the same page when it comes to making this decision. Have your spouse attend important appointments with you pertaining to your child if possible so that they can get a clearer picture and be able to participate in making an informed decision.