Tonight, I was tucking in one of our eleven year olds, praying with him, talking about what we are going to do tomorrow, telling him something that I noticed about his character today and how much I appreciated that, giving him a hug and a kiss, and leaving him with a smile. After I shut the door, it occurred to me that I’m sure that by the time my oldest boys were eleven, I had stopped tucking them in. They had seemed so old already and besides that, I had many little ones who needed help into their pyjamas and tucking the younger ones in took over.

Eleven is not old. Eleven is an age when they will still open up to you in those one-on-one moments and if you can establish that kind of communication at that age, it will likely continue into their teen years. Tuck-ins build relationships. Tuck-ins are time, a precious commodity in a large family.

I’ve thought a fair bit in the years since I stopped tucking my big boys in (though I didn’t think of it right away of course) that I didn’t even know that the last time I tucked them in would be the last time. I didn’t cherish that last prayer said by their bedside, that last round of “what was the best thing that happened to you today?”. Their responses are not written into my heart the way I wish they were. I made a selfish choice because I wanted the work of my day to end sooner and I saw tucking them in as work.

It never was. It was such a blessing. It was such an honour. Time to get to know these precious, still developing humans in a rare one-on-one opportunity. I squandered it. 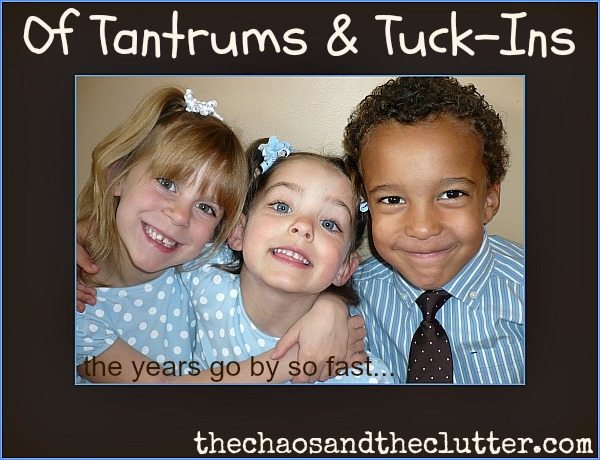 Some days, I still dread doing bedtimes. When The Husband is out of town and it’s the fourth or fifth night in a row that I have to do all five tuck-ins by myself, it feels like a chore, not a privilege. It’s at those times that I think most about my older boys not wanting me to tuck them in anymore and how this time is so fleeting. I also think about those friends of mine who would give anything to be able to tuck their child in each night, but whose children are waiting for them in Heaven.

I have so many regrets from when my older boys were younger. I have regrets about my parenting with my younger ones too, but the regrets are different. Because I have older kids and younger ones, I have had the treasure of learning and doing better because I know better. I have the rare privilege of really understanding how fast the time goes!

I’ve said yes to things I didn’t with my boys. I’ve hugged more and lectured less. I’ve grabbed onto moments and not let them go. I’ve allowed messes. I’ve blown bubbles and walked barefoot in the grass. I’ve listened more and shushed less. I’ve ignored tantrums and praised kindness. I’ve stopped watching the clock and started watching my kids. I’ve begun to “get” that the tuck-ins and even the tantrums will someday be what I will miss.