Many years ago, Fred had a pirate themed birthday party so when Snuggle Puppy chose a pirate theme for his party this year, I knew it would be easy to plan. 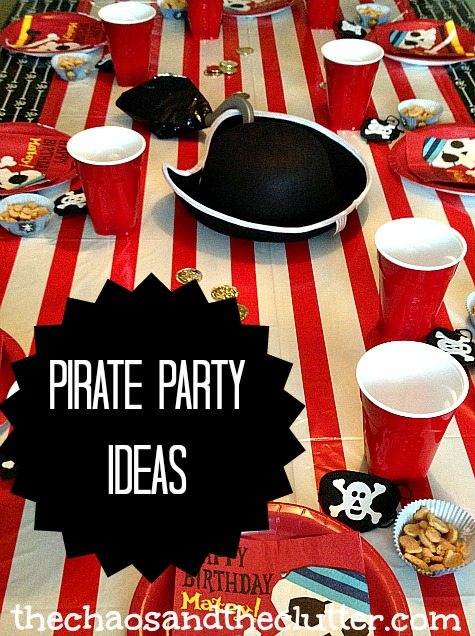 This party was planned quickly and I wanted to make it as simple as possible. Snuggle Puppy had about 6 friends at his party.

I used a pirate tablecloth, napkins and plates, red cups, and pirate patches. As a centrepiece, I used a pirate hat and hook and I sprinkled gold coins here and there on the table. I also used pirate cupcake liners and filled them with goldfish crackers and put one at each place setting. 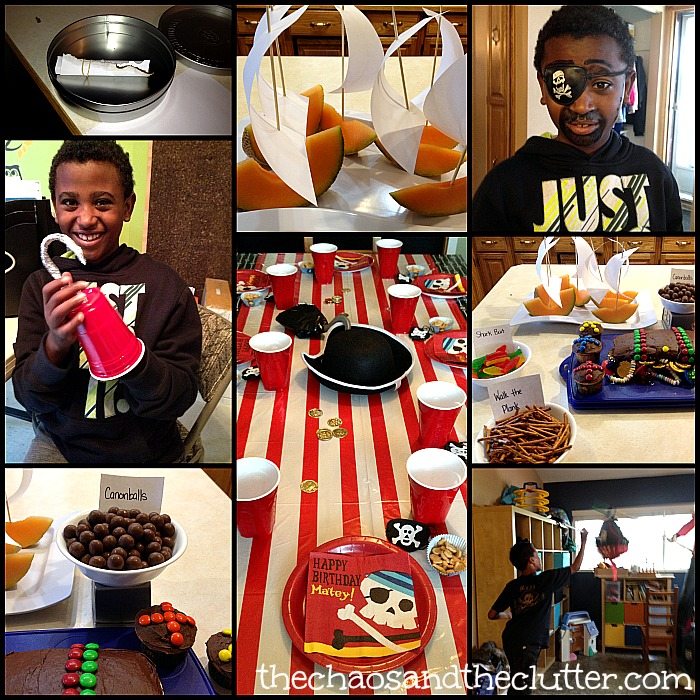 When the pirates first arrived, our daughters painted their faces to make them look the part.

They then made themselves hooks. This was such an easy craft activity. All I did was make holes in the bottom of red plastic cups and provide tin foil for the kids to shape into hooks. By putting the foil hook through the hole, it created a hook for them to wear on the end of their arm. 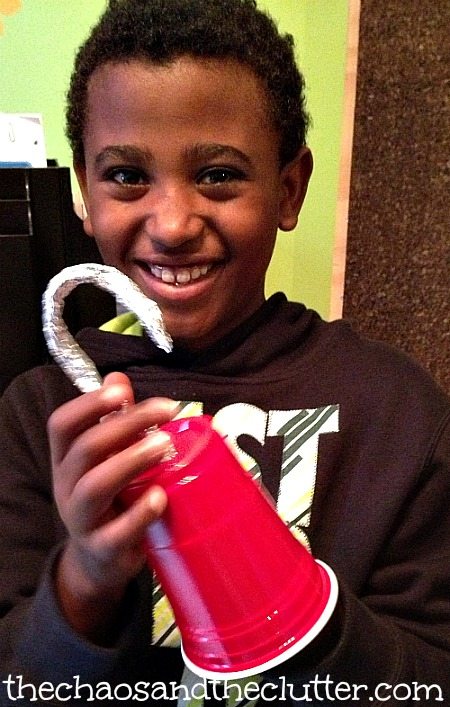 We designed a treasure hunt for the party goers. We hid a treasure map (complete with burnt edges) in a tin and buried the tin in the sandbox. We then gave the pirates instructions to walk 26 paces south of the starting point and start digging! The map in the tin led to multiple locations each containing a clue in an envelope to the next location. At the end of the hunt, they found their treat bags to take home with them.

We had a pirate piñata for the kids which we were planning to hang outside on a tree but we got a bit of a downpour that afternoon so we improvised and the husband held it with the end of a mop while the kids hit it with a stick!

I made melon boats using cantaloupe. I cut sails out of white paper and used bamboo skewers to attach the sails to the “boats”. I put out a bowl of Whoppers labelled “Canonballs”, a bowl of pretzel sticks labelled “Walk the Plank” and a bowl of Swedish fish candy labelled “Shark Bait”.

The pirate treasure chest cake was really easy to make. I used a loaf pan to make the cake in. With the leftover batter, I made a few cupcakes. Once the cake had cooled, I removed it from the pan and sliced almost through to create a lid. I then iced it with chocolate icing and slipped in Ring Pops, chocolate gold coins, and candy necklaces to look like they were coming out of the treasure chest. To finish it off, I added some M+Ms to the chest. 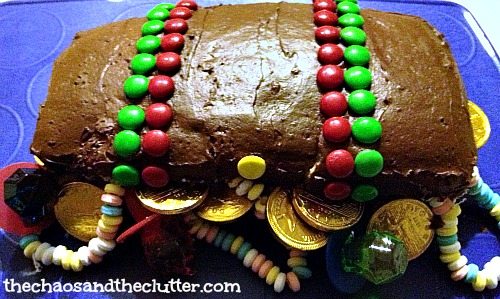 I just finished the cupcakes simply by making them into an X marks the spot using chocolate icing and M+Ms.

In the treat bags we sent home with the party guests, I included play gold coins, parachute men, chocolate gold coins, ring pops, beach erasers, and spinners. We also sent each of the guests home with a buccaneer sword. We’ve now got enough parenting experience that we know not to give boys swords during the party but to instead send the swords with them to use in their own homes!

Last year, we did a pirate unit in our homeschool, so if you are looking for printable pages, hands-on activities including a sensory bin, or more food ideas, you can check out those pirate ideas.