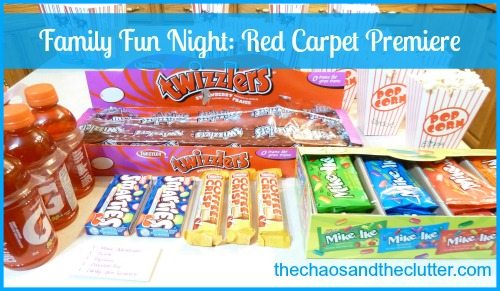 For our most recent Family Fun Night, we did a theatre theme.  Some of the kids even dressed up and pretended to be stars going to a Hollywood Premiere!  Anyway, I don’t have the best pictures, but you’ll get the general idea.  The theme idea came from a friend, who also does Family Fun Nights with her family.  (thanks Karen!)

I decorated with movie themed tablecloth, cups, napkins, and skewers and used the extra paper popcorn boxes as more decorations.  We had a make-your-own nachos bar for supper with blue and white tortilla chips, cheeses, peppers, tomatoes, onions, and jalapenos.  The kids all assembled their own and then I cooked them.

Einstein and Snuggle Puppy having fun

After a nutritious supper of nachos (!), the kids were each given a ticket that they could redeem at the “concession”.

The concession was a hit of course!  Even at a real movie theatre, there is no way the kids would be allowed that much junk to eat!

Fred gets creative with the licorice!

I had closed all the blinds and curtains in the house, trying to make it as dark as possible to make it like a theatre.  As a family, we watched “The Secrets of Jonathan Sperry” which was perfect as it was appropriate for all the ages.  Later, when the younger five kids had gone to bed, The Husband, The Ferrari, Fred, and I watched “The Blind Side”.  It was a great Family Fun Night and the kids all had a blast!