Earlier this week, I had a few friends over for a busy bag and sensory bin swap. I wasn’t as organized as I wanted to be but it still took us no time at all to put together our bins and each of us ended up with four different sensory bins. I would call it a success! 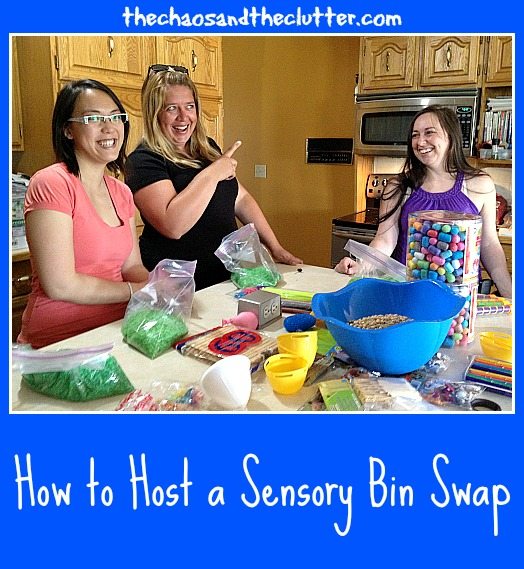 Doing a sensory bin exchange is a great way to get new ideas too and share what works well with your kids and learn what is working well for others.

There are several different ways that a sensory bin swap can work but all are great ways to keep the costs down and get some new ideas.

Here are a few ways a sensory bin swap can work:

1. A group of moms can each make one sensory bin and then once a week or once a month, they can rotate their bin over to the next mom. If you have a group of six moms participating, this will mean that your kids will get to play with six different sensory bins and you’ll only have to make one!

2. A group of moms can each make one theme bin but duplicate it as many times as there are people in the group. The moms then get together and give out their bins. Each mom will go home with as many bins as there are people in the group. It’s fun to add a dinner out or at least tea when getting together as a reward for all your work assembling the bins!

3. A group of moms can work together to create all the bins or bin bases. You will make one of each type for everyone in the group so the amount of sensory bins you go home with at the end will depend on how many you all have planned.

Of course, you can also do an informal swap with just one other mom and rotate your bins out that way. There will be less variety in doing it that way.

How to plan for a sensory bin swap:

You will need large resealable bags or stackable bins with lids to store the sensory bins in. 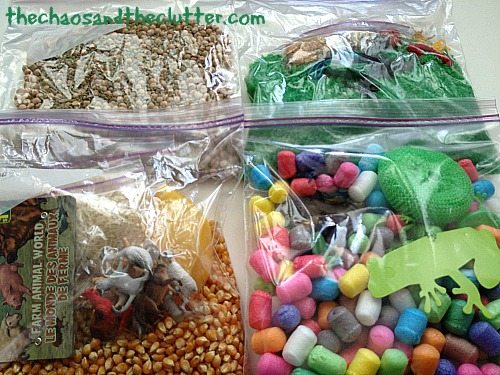 At our sensory bin exchange, we each ended up with the makings of four bins.

For the bug sensory bin, we used rice that I had dyed green. I provided peppermint oil to scent the rice but didn’t do it ahead of time because some kids don’t like certain scents and I wanted to let everyone make a choice for their family. For those who wanted the scent, I added a few drops of the peppermint oil to the bag and once shaken, we had peppermint scented rice. 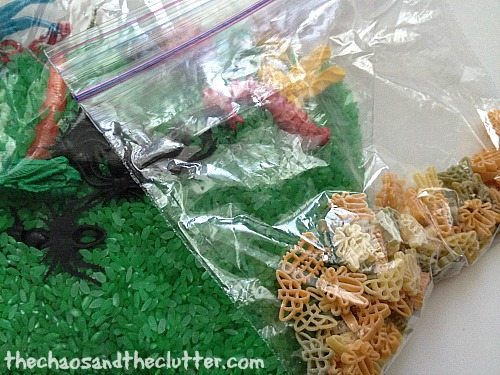 For the farm sensory bin, we used popcorn seeds as the base and added a smaller bag of dry soup noodles for the hay. I found silicone yellow egg poachers in sets of two at the dollar store that I thought would work really well in a farm bin.  I also found little sticks called matchsticks and knew they would be great for making fences in this farm bin. I included a little pack of farm animals for everyone. 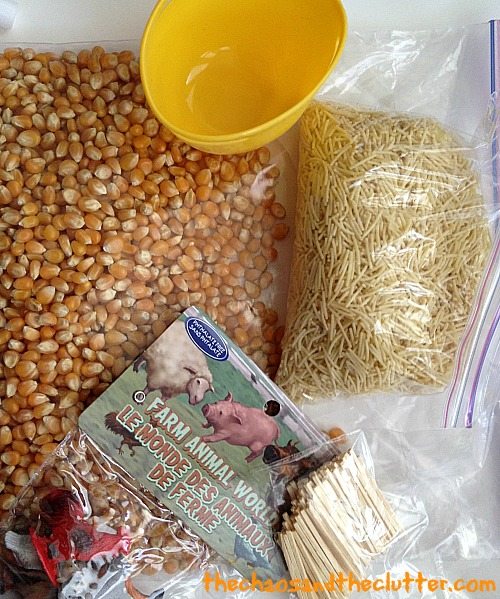 The kids and I made our farm bag into a bin later in the day. I added a few of our toy animals and the bin was ready for play. I also added a funnel and a small container and lid for pouring and scooping. Granola Girl liked scooping the popcorn seeds into the container, putting the lid on and shaking it to hear the sound it made. 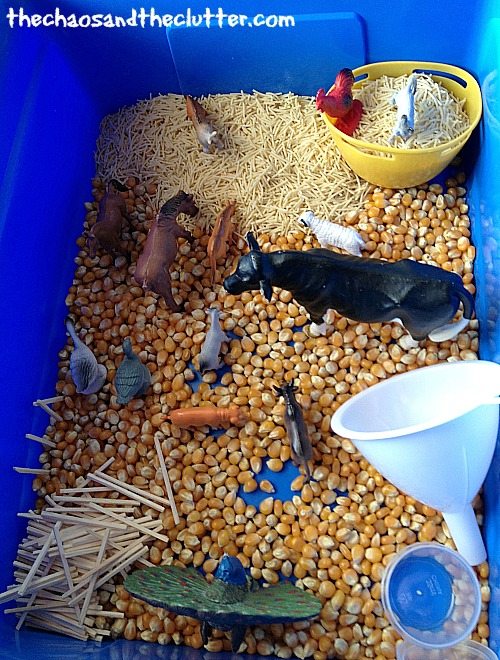 This sensory bin wasn’t originally a frog bin, but I had bought a pack of jump frogs and a pack of kitchen sponges from the dollar store and when I commented that the sponges would make good lily pads, a frog bin was born! We included play puffs (I bought two pails of them at the dollar store and we each took half a pail), a kitchen sponge, a frog stencil, plastic jump frogs, stretchy frogs, and toy frogs that I had in the house already. Once my kids have used this bin, I can re-use the play puffs for crafts. 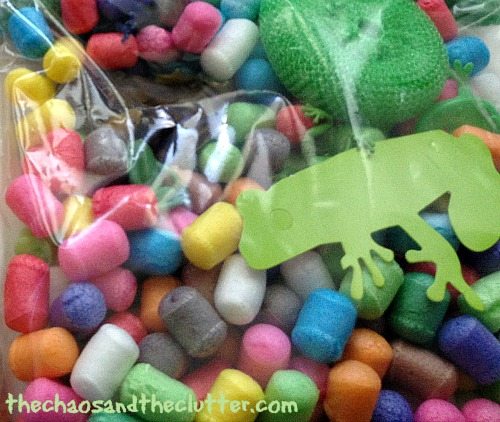 Hosting a sensory bin swap enables you to buy things in larger packages and share the cost. This can be as simple as splitting a set of funnels that you pick up at the dollar store or can be a larger item such as splitting the cost of a huge bag of kidfetti.

I shopped for our sensory bin items at the dollar store and at Bulk Barn. Not including the cost of the bags or bins, each of the sensory bins averaged $2.50. We each paid $10 and ended up with four sensory bins and a few other odds and ends like a homemade sensory ball. Had I made just one of each bin, some of the costs (like buying a pack of stretchy caterpillars just to use a few) would have stayed the same so the cost of my bins would have been much higher.

This post is part of a 5 day series on Simple Sensory Solutions as part of a Hopscotch with iHomeschool Network. Pop over and see the other great topics from an amazing group of writers! 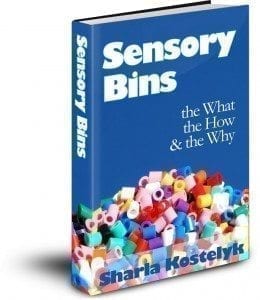