He came to us last night, asking if he could go into work today with his daddy to ride his bike around town. I arranged for him to go visit a friend of his this morning and then he could enjoy some freedom as he periodically checked in at my husband’s office the rest of the day. He had plans to buy himself lunch and maybe stop at the bike park. He also wanted to go to the bookstore, one of his favourite places in the world and spend some of the hard earned money he had made helping my brother-in-law build a deck.

This morning, they loaded his bike onto my husband’s vehicle and he set off for his adventure. Things started to go sideways when his $20 fell out of his pocket on the way to his friend’s. He retraced his steps but was never able to find it, so his plans for choosing a brand new book went out the window. It was because of this that he decided to forgo the bookstore and head for the bike park. 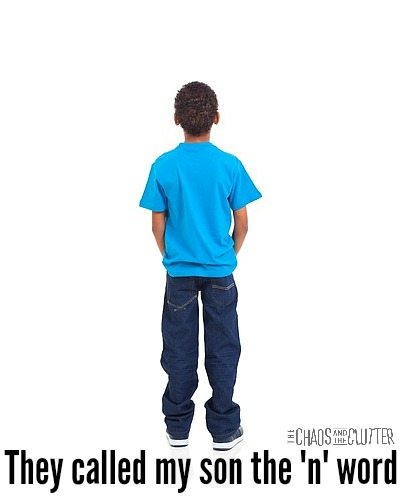 It’s usually pretty empty midweek but today when he arrived, there were four teen boys there, older than he is. They were fighting among themselves and he heard them saying the ‘f’ word to each other, so he knew enough to steer clear.

He was riding up and down the jumps, enjoying the new bike he just won a week ago in a draw when they directed their attention at him. They swore at him and accused him of spraying dirt in their direction. He ignored them and rode further away. And then the words came, “What the f*@& are you doing, you N******?”.

Typing that made me almost throw up.

You see, this is a day that I had tried to prepare for, in the way that you prepare for a tragedy or freak accident, knowing that it could happen, but thinking that it will never happen to you, to your family.

I had told my boys, all four of them, but my black sons in particular, about racism. I had had “that talk” with them, bawling my way through it when Trayvon Martin was killed.

Earlier this week when mothers lost their children and children lost their fathers and mothers in the church shooting in Charleston in an act that can only be described as racism, I wondered again how to explain to my children the hatred in this world.

Today, my gentle giant saw that hatred first-hand. After those boys yelled at him and swore at him and called him the ‘n’ word, they picked up rocks and threw them at him. A group of four older teen boys were throwing rocks at my 13 year old, there by himself.

The momma bear in me is so angry and I wish I had been there to protect him, but what can you say to change the minds of those so corrupted by hatred that they would even dare to whisper that word?

So when my sweet son told me what had happened, his bottom lip quivering until he could no longer contain the tears, I held him standing in a parking lot and cried with him. I told him that he is made in the image of God, that the colour of his skin is no accident, but nor does it define him. I told him that those boys were ignorant, unaware of the truth, that I was angry and sad all at once. That when I thought about the hatred that they held in their hearts, it made me want to weep.

Later, when we had gotten home when he had calmed down somewhat, he told me the rest of the story. Like how scared he had felt and how after he left the bike park, he broke the chain on his brand new bike and how it was such a bad day, the kind where every little thing (and every big thing) seems to go wrong. From losing his money to the broken chain, to not having enough money to have the chain fixed to what those boys did and said to him, it had been a hard, hard day.

I told him how wrong what had happened to him was. I told him that we had to stand up for what was right to try to help others who would come after him. I called the police.

My boy, my boy who has Aspergers and who has a hard time articulating himself and who gets flustered when people ask him his name became so nervous about the police coming to talk to him that he could hardly breathe. But he agreed that it was the right thing to do. He was brave. I’m so proud of him. It’s always such a privilege to be his mom.