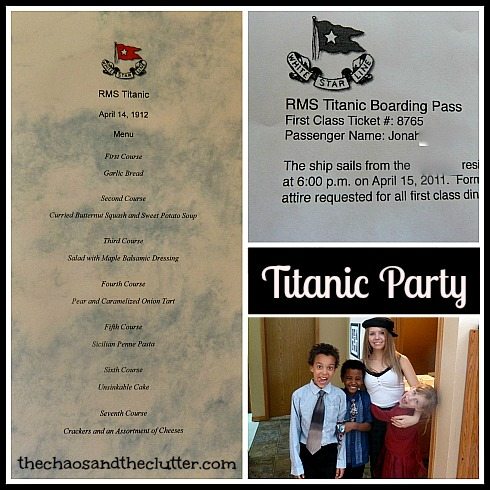 Einstein is obsessed with Titanic (obsession takes on a whole new meaning when you have a child with Asperger’s!). I have long learned that it is best to just go with his current obsession of choice rather than fight it. April 14 is the anniversary of the day the Titanic sank and he wrote it on the calendar and wanted to know how we were going to commemorate that day.

I told him that we would do something, but as it got closer, I realized that that day I had a hair appointment and that night was The Husband and my date night, so I sat Einstein down and let him know that we would have to do something on Friday instead. In a very serious voice, he told me that Friday would work because the 15th is the anniversary of the day that Titanic first touched down on the ocean floor!!!

On the night the Titanic sank, they were serving a 7 course dinner in the first class dining room, so I decided to do the same for our Titanic party.  It may have been a bit on the ambitious side as I forgot to calculate that a 7 course plate service meal for 11 people would mean 77 dishes, so we were mixing and matching plastic plates with our fancy ones!

Here is the menu I made and cooked up for the evening:

The Husband made a playlist that included string quartet music (including the song the orchestra was playing while the ship sank) and songs from the Titanic movie, which we listened to during dinner and danced to.  I taught the kids which fork to use for which course and they sipped ginger ale out of wine glasses and loved that their napkins were folded into fans!  It was a very fun night!!!

Snuggle Puppy and Dancing Queen take a break from dancing in “the ballroom”!

(sorry M. about the eyes closed thing, but this is the only dinner picture I have of the “grown-ups table”!)

Dancing Queen, Granola Girl, and Einstein finish their salad course and sip ginger ale.  Note the crayons and Titanic colouring sheets for when boredom set in between courses!