Words are a powerful thing. They can alter your mood, build bridges in relationships, encourage, breathe life, and transform. I’ve shared with you how two words transformed our family for the better. Those words are an example of what extraordinary power what you say and think has. Words also have the power to destroy, to tear down, to defeat nations, and to break bonds.

A few months ago, I noticed a general pattern in my moods. I was feeling less content with my life and with my circumstances. I was restless and negative. I was pretty darn unhappy to be frank. What especially scared me was that it seemed to be trending in a downward spiral. Each day, I felt worse than the one before. 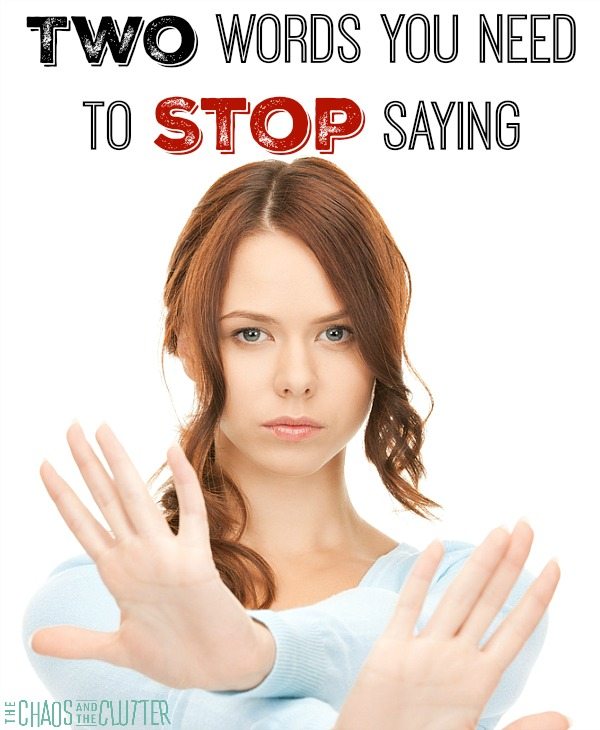 Nothing in particular had changed about our circumstances. Our life has been challenging for at least the past ten years and I don’t expect that those challenges will lessen in the next five years or so but I had usually managed to maintain a mostly positive attitude despite life’s circumstances and ups and downs. I spent some time analyzing why it was that I was becoming such a negative person. I didn’t want to be the person I now saw staring back at me in the mirror. I wanted to be that person I had been, the one who could find the humour or at least the silver lining in every situation.

As I analyzed this state I was in, I could find only one difference between the me of present and the me of the past. I had allowed two seemingly innocuous words to creep into my vocabulary. The words were not a phrase that I was accustomed to using so at first, they felt strange fumbling around in my brain and even stranger when they escaped my lips.

As with most things, once I had said them out loud, they became easier and easier to say and they were in my brain, embedded like a persistent houseguest who outstays their welcome and becomes more and more at home in your dwelling.

What were these powerful words that could almost debilitate and discourage me even in a whisper?

“I deserve a break.”

“I deserve things to go my way for once.”

“I deserve some peace.”

“I deserve for you kids to listen to me.”

“I deserve some chocolate and a glass of wine.”

“I deserve a new dress.”

Whether or not I actually deserve those things isn’t the point. By speaking those words, even just in thinking them, I was significantly contributing to my own unhappiness. I was focusing on the negative rather than the positive.

Instead of feeling blessed because I got five minutes to myself, I lamented about why I didn’t get an hour. Instead of being grateful that I have a house to live in, I perseverated on the thought that I deserved more help with keeping it clean. Instead of choosing thankfulness, I chose to reserve a seat to my own daily pity party and was sitting longer and longer at that table.

Thinking about how you deserve more instead of looking for all the blessings in front of you is a recipe for unhappiness. It can lead to procrastination, divorce, weariness, anger, and dismay.

One day, I said to my son who was being rude to me,”Try that again. I deserve respect.” I’m not debating that he should have been more respectful as I am his mom, but what came out of his mouth was, “I deserve to get anything I want.” Obviously, that’s laughable as none of us get whatever we want and certainly not when we are living in our parents’ home not paying rent, but the statement shocked me because I realized immediately that I had created that attitude in him. He had been hearing me talk for weeks about all the things I deserved and he had begun to let those two words seep into his brain and infect his thoughts.

The “I deserve” virus was in fact spreading throughout our whole home. It had become an epidemic, all these little people running around asking themselves what others could do for them instead of what they could do for others because you know, they deserved the best of everything and the easiest of chores or no chores at all for that matter! The only way to stop the spread of the virus was to immediately eliminate that toxic phrase from my vocabulary.

Those words had become a habit, so it wasn’t easy to get them out of our home, but as I have consciously grabbed hold of them when they come into my mind and reminded myself of what a lie they are and how dangerous that thinking is, I think them less and less. I hear them escape my lips even less often and I’m beginning to hear them less from everyone in the family.

I read somewhere once that deservedness is a currency of shame. The idea of deserving something positive also leads to thinking of deserving negative for not measuring up. Using the words “I deserve” sends the message to our children that they can be good enough or not good enough to have positive or negative results. This could translate into things or into love. When we remove the idea of deservedness from our minds, we can have things and love and attention whether or not we did anything that amounts to “enough”. This new framework allows for gratitude and for grace.

If you aren’t convinced at the negative impact these two little words have, I hope you will be willing to humour me with a bit of an experiment. Would you go with me on a one month journey to discover how much happier you feel when you eliminate these two toxic words from your life? Would you be willing to go a little further with me in this experiment and consider replacing those two toxic words with these transformative two words that will encourage and strengthen your family? Let me know what you find. 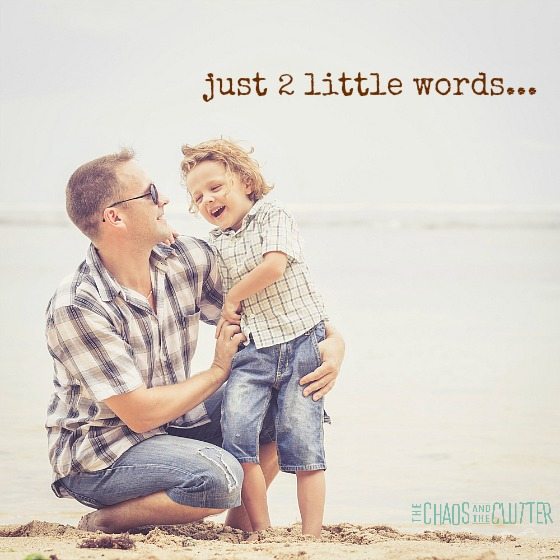