Please note: Trampolines are responsible for many injuries and common sense and adult supervision should be used with all of these activities. I am not responsible for any injuries that occur as a result of playing these games. As a parent, you know your child’s skill level and ability best and can determine if they are ready for these activities.

As the parent of five kids with sensory issues, our trampoline has been our best investment. We have had ours for 8 years and this year after daily use and being left outside for six winters in the deep snow, the bottom finally tore, making it unusable. I am so used to being able to use the trampoline as a brain break for the kids and they are so used to being able to use it to help keep themselves regulated that it was a miserable few months for all of us without it.

I didn’t want to have to buy a whole new one but then a friend told me that Springfree sells replacement parts. We ordered a replacement mat and The Husband and a friend of his spent an afternoon attaching it and now our trampoline is as good as new! 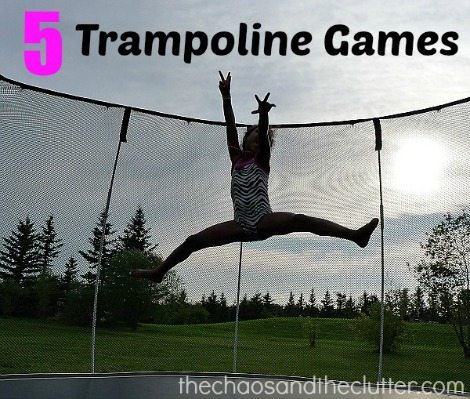 So in celebration of our newly functional trampoline, I thought I would share some of the games our kids play. Some are classic trampoline games and some they invented themselves. All are fun. For those of you who have children with sensory issues or SPD (sensory processing disorder), it may be worthwhile to note that these games are examples of proprioceptive sensory play. You can find more proprioceptive sensory play ideas at the 6 Days of Sensory Play Blog Hop.

There is no trampoline game more classic than bum wars! The premise of this is that the last one standing wins! You need at least 2 players but can be played with more. Each player jumps a few times to warm up and then when agreed, they each drop down to their bums and then jump back up, landing on their feet. Each player is only allowed one bum bounce and one feet bounce. If they do double of either, they are out. The game is more challenging if there are adults and children playing because of the weight differences. (ask me how I know!)

This is another classic game. One person sits in the middle of the trampoline, holding their knees to their chest. The other person jumps and tries to get the “popcorn to pop” (to get the person’s arms to pop open).

I think my kids invented this one. It doesn’t totally make sense because our trampoline is round, but it would make sense on a rectangular or square trampoline and they have fun with it and that’s what matters! The person who is “it” closes their eyes and counts to 10, standing in the middle of the trampoline. Everyone else moves to a corner of the trampoline. When he says “10”, everyone stops moving. With his eyes still closed, “it” points to a corner and everyone there is out.

Put some balls on the trampoline. In this trampoline game, the kids pretend that the balls are poison and jump while trying to avoid the balls, which of course roll around unpredictably. If someone is touched by a ball, they are out and must sit out for the rest of the round. To add to the sensory experience, you can use other items instead of balls such as pillows, stuffed toys, crumbled tin foil, or other soft items your imagination can think up.

1. Our kids love getting their bathing suits on and jumping in the rain. The water makes the trampoline bouncier. This can also be achieved by putting a sprinkler under the trampoline. 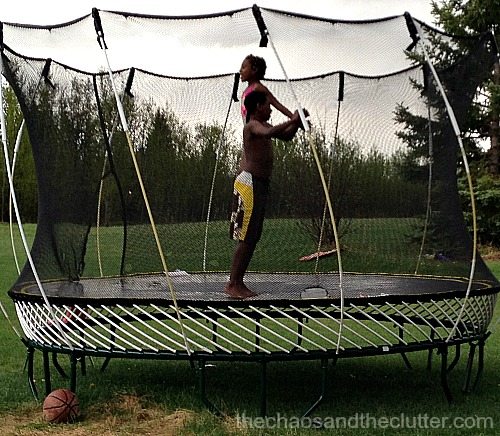 2. Another favourite trampoline activity here is having sleepovers on it. They set up sleeping bags and have a campout using the trampoline as their huge bed.

3. Lay out a large sheet of bubble wrap on the trampoline mat and let the kids jump!

4. We attach an old parachute to ours (you can see in one of the pictures below how the wind poofs it out and makes it like a tent inside). I don’t know how safe or smart it is to do it, but the kids really like jumping inside their homemade bouncy castle! 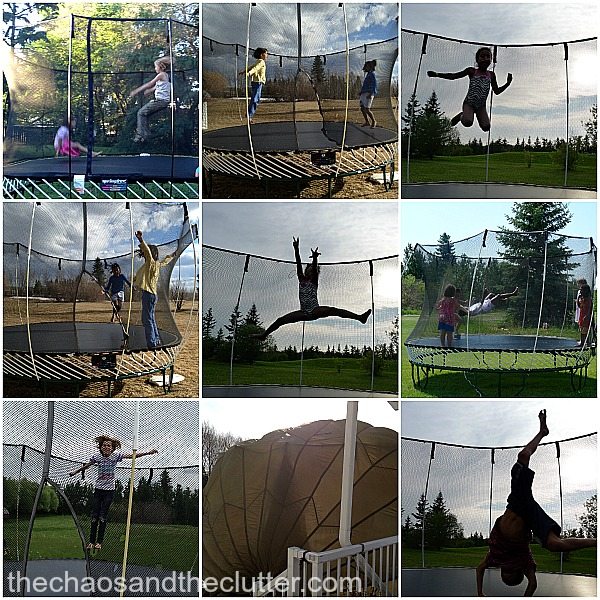 5. Have the kids do tricks like multiple bum drops or flips or jumping as high as they can and try to imitate or beat the one who went before them. Again, trampolines can be dangerous. We are fortunate in that we have not had any major injuries, but please do use caution.