Lately, I have been doing a lot of thinking about our time in Ethiopia when we went to pick up our son, who was 7 at the time, and our daughter, who was 4 at the time. 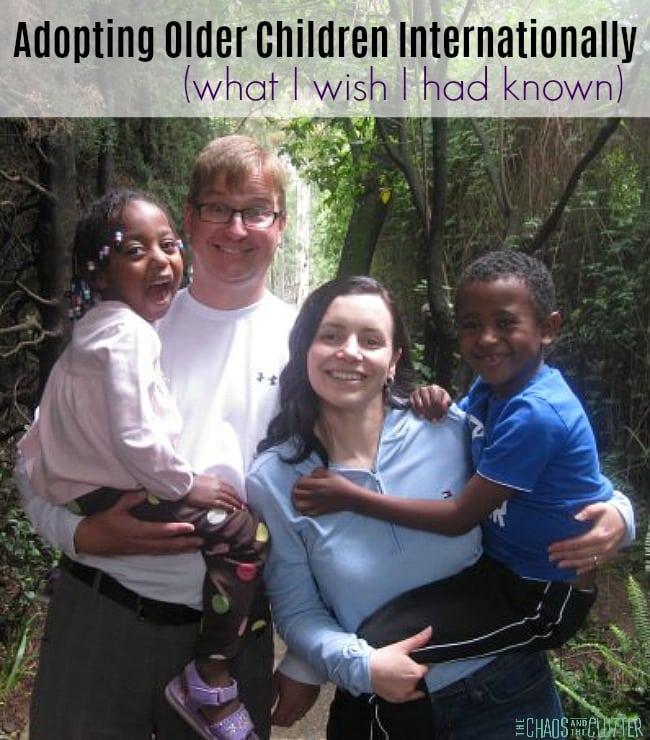 In a lot of ways, things did not go very well. Do you see the truth behind the picture above? Look closely into our overtired, overwhelmed faces.

Our adoption agency had gone bankrupt, so we were traveling four months sooner than we had planned and were not prepared emotionally, financially, or in a practical sense.

Due to the circumstances, my husband Mark was there for a week before I arrived and he had a really hard time communicating with the kids, leaving all three of them feeling frustrated.

I was able to pick up Amharic (the language they spoke) much easier than Mark was. Although that did help, I still did not know enough of the language to be able to really put the kids’ fears at ease.

The kids were, in general, traumatized and terrified. Our time in Ethiopia was, in all honesty, a bit of a nightmare. Reflecting on it now that things are settled and I am not in an emotional or exhausted state of mind, I am able to see what I wish we had done differently or had known at the time that would have helped us.

I hope that by sharing what I wish I had known when we adopted older children, others can have an easier transition than we did.

1. It gets better! The road has not been an easy one. There have been a lot of ups and downs. It took a lot of work, but it also just took time. I wish I would have been able to know with certainty that things were going to get better because I lost sleep, tears, and worry at the time, wondering if life was always now going to be hard.It took a long time for things to get better for us. I hope I don’t scare you by saying that they got a lot worse before they got better. (see #5!) Healing is possible.

2. Their initial behaviour is not a reflection of your parenting. This one may seem obvious to others. Of course if you have only met the child the day before for the first time, their behaviour has nothing to do with you or your parenting skills, but at the time, I felt like I must be the worst parent in the world.

When we would go out in public and they would tantrum, I would feel like people were judging me. When we were alone in the hotel room and they were having tantrums, I was judging me!

In retrospect, they were two scared little kids who did not speak the same language as me and were going through a traumatic time. I was a complete stranger and their behaviour or sadness had nothing to do with my parenting skills or lack thereof.  I wish I had been able to relax and not take it so personally.

3. Take Time to Breathe. We were so sleep deprived before even arriving in Ethiopia. Add to that the time change and the stress, and our brains just were not working at their full capacity! Looking back now, I am able to see simple solutions for things that at the time, seemed like major problems.

As an example, our kids usually only wanted to eat doro wat (which is like a chicken stew). Traditionally, it is served with a hard boiled egg. Our kids would fight and tantrum over who got the one egg. They didn’t want us to cut it in half. They didn’t want to take turns. They would not share it. Every time, this egg was a huge issue.

Now that I can think clearly, I realize that we should have ordered it with an extra egg – such an obvious solution, but one that did not occur to us the entire time!

Of course, eventually you want your kids to learn about turn taking and sharing, but the most tumultuous time in their lives is probably not the time to start insisting on that! My suggestion would be to take a step back and take a deep breath and consider simple solutions. I can think of about ten other examples of this same type of thing during those weeks where we were so stressed out that we were not thinking clearly.

4. Don’t count on anything. Many families travel to pick up older children and find that their children are easy and they are able to tour the country and spend time with other adoptive families. This is often the case because most children will have a honeymoon period initially. But there are exceptions and in our case, our kids did not have a honeymoon period while we were in country.

It soon became apparent that our plans to travel around Ethiopia were not going to work out. If you have strong expectations for what your kids are going to be like or for travel or sightseeing that you plan to do when you are there, you will likely be disappointed.

I wish we had gone into it with less expectations and been more easy-going about it. When we finally resigned ourselves to the fact that our kids did better if we just stayed in the room and ate our food in the room and did not go out, things improved dramatically.

I suggest that at minimum, research by reading and take the time to speak candidly to families who have lived it. Even this will not adequately prepare you, but it may help arm you with a toolbox of skills in case you need them.

Preparing ahead could help you recognize the signs earlier as well. If you are able, attend conferences while you wait for the adoption. The conference I would recommend as the best would be the Empowered to Connect Conference.

These books are a good place to start in preparing for adopting an older child.

6. You’ll have to parent differently. Parenting an older internationally adopted child the same way you would a biological child who has been with you since birth won’t work.

You’ll need to use connective parenting strategies. You’ll have to be sensory aware. You’ll have to practise extreme self-care. Incorporate connection activities. Give them an emotional vocabulary. Learn about anxiety in kids. Be trauma aware. Learn calm down tools.

You may become an expert in fight, flight, or freeze. This is not going to be your average parenting rodeo!

7. Let it go!  I had this foolish notion that while we were in Ethiopia, we should have rules for them and consequences so that they could begin to adjust to our house rules (our family isn’t overly strict, but we do have some basic rules). I was convinced that if we were pushovers in Ethiopia, they would walk all over us once we got home.

When I think about that now, about how I gave them time-outs (they were probably completely bewildered because they couldn’t even understand most of what I was saying), my heart just breaks for them. I wish I could go back and just hold them more, play with them more, and let everything else go.

Who would it have killed if she had worn his flip flops instead of her shoes every day?

So what if they had not brushed their teeth for those two weeks (they ended up having over $4,000 in dental work that needed to be done, so I’m sure that an extra two weeks of not brushing after years of not brushing wouldn’t have made a difference!).

My advice to others would be just to relax and get used to each other slowly during the trip. The rules can be introduced once you are home.

8. Try not to predict their personalities. This is a really tough one for people. All we have of our kids are these pictures and so we have spent hours analyzing the pictures and poring over every detail, including their facial expressions. From that, we naturally make assumptions about their personalities and then when we meet them, if they do not match what we expected, it can be a difficult shift.

In our daughter’s referral and update pictures, we thought she looked so sad, heartbroken actually. Now that we know her, one of those looks is kind of a sad look, but more of an “I didn’t get my way” kind of sad, and the other, a mischievous look!

From our son’s pictures, we pegged him as being outgoing and fun and happy. It turns out that though he is friendly and very likeable, there was a lot of sadness hiding behind that smile and underneath those bright eyes, was a traumatized boy who needed help to work through his feelings and his past.

9. You cannot do it alone.The first weeks home are much harder than anyone can prepare you for. Even if your child is in a honeymoon phase or just an easy child, it is a huge transition for the whole family.

You will have jetlag and even possibly be ill. If you have other children at home, they will need extra time and attention when you get back, not only to reassure them that they have not been replaced, but they will have missed you while you were away.

Many mothers experience post adoption depression, from mild to severe. The language barrier alone is exhausting.

The extra laundry, extra cooking, extra thinking, extra emotion, extra stress, and the extra appointments as you sort through parasites, fungus, and perhaps even therapy for your child create a life much busier than the one you had before.

ASK FOR HELP! Better yet, set it up before you leave, while you are still able to think straight enough, while you have time to make the phone calls. Arrange for people to bring meals, do laundry, clean your house, or take your other kids out for outings.

10. Attachment and bonding are possible. With our previous adoptions, we had gotten our kids as newborns or babies, so I did not expect that I would be able to attach as much to older children. I knew that over time, they would feel like my kids, but I thought that it would take a long time.

Secretly, I worried that maybe I would never be able to love them with the fierceness and passion that I love my other kids.

I wish I had known then what I know now…that sometimes just thinking about or talking about these two can bring me to tears, that the first time I went away without them, I missed them with a hollowness that is difficult to describe, that they are a part of me.

I wish I had known that even with kids who were seven and four the first time I held their hands in mine, I would be forever changed by their love.

Is there Hope for Reactive Attachment Disorder?

Books for Those Adopting an Older Child 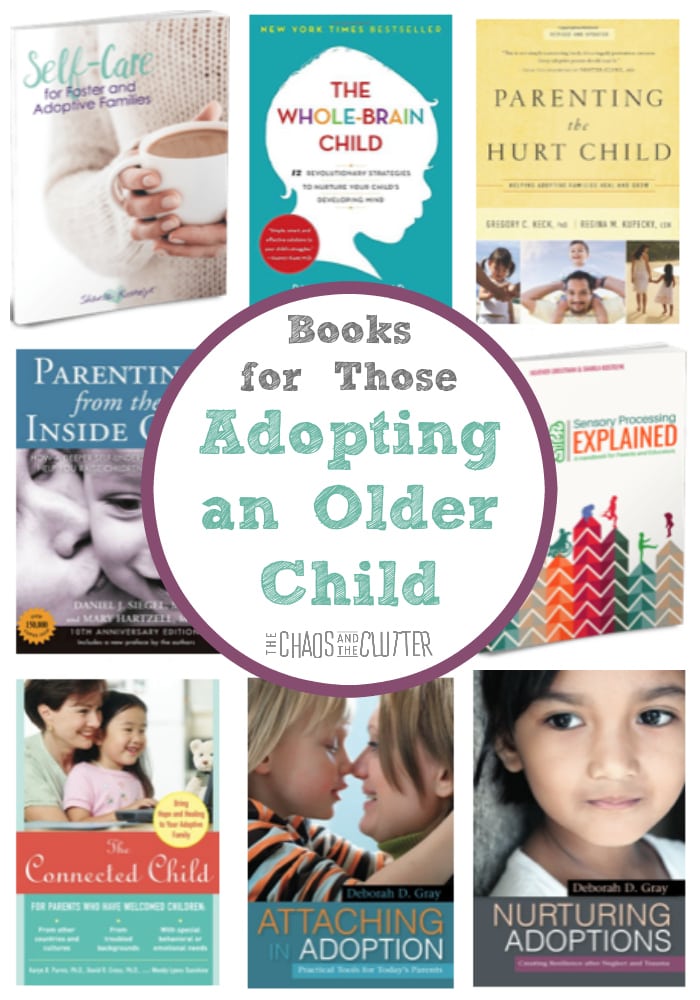