I bet at this point, some of you are checking to see if you accidentally came to the wrong blog! Zombies don’t really seem like they’d be my thing, right?! Don’t worry…you’re in the right place. For one of our son’s recent birthdays, we threw him an epic zombie party and even I couldn’t help but think it was fun! 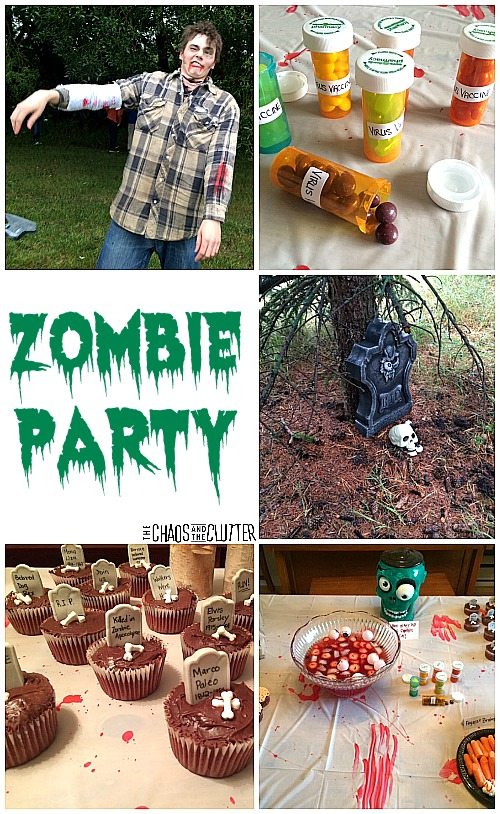 Finally after 4 sons and many, many birthday party themes that I thought I would impress them: army, sports, Mickey Mouse, pirates, dinosaurs, fireman, hockey, I found a theme that knocked it out of the park!

Moms, if you are looking for a party theme that will make you the “cool mom” with your tweens and teens, then zombies it is! When planning a zombie party, the only thing you need to remember is “the grosser the better”.

Planning this party was a lot of fun. The kids and I laughed about me saying things like, “There isn’t enough blood on this paper. We need more blood.” and calling my friend to ask, “Do zombies only eat brains or can they eat other body parts too?”

I hit up a local dollar store for most of the decorations. We hung a banner on the front door and placed some gel ‘blood’ on the front window to set the stage for the guests when they first arrived. 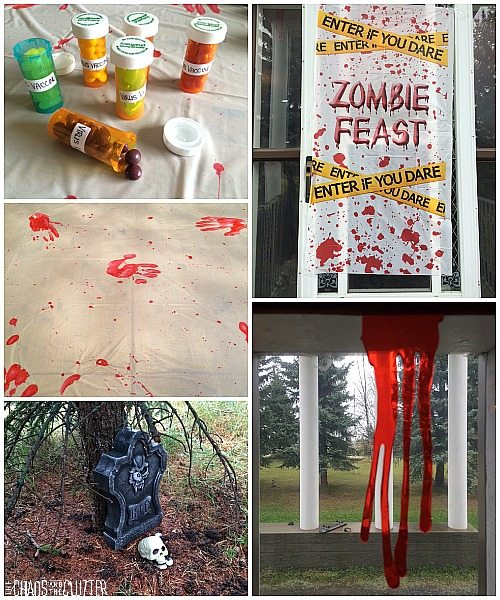 We made a themed tablecloth by using a white plastic tablecloth and adding handprints, streaks and splatters with red paint.

I washed out some old pill bottles and filled some with Skittles and some with Mike and Ikes and added labels with the words “Virus Vaccine” on them. I placed these on the table.

When party guests first arrived, they had the option of having their faces painted like zombies. My girls were the face painters using little kits that included gel ‘blood’ to finish off the looks.

Another simple activity was having the party guests guess how many lollipops were in the scary head. Whoever guessed the closest without guessing over won the whole thing to take home.

We also happened to have an eyeball sensory bin made and left it out for the party. I wasn’t expecting teen and preteen boys to be too interested in a sensory bin, but it got played in A LOT during the party! Some boys spent over 20 minutes playing with it. 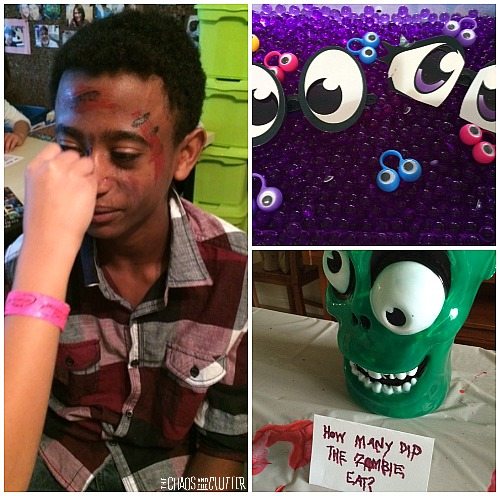 The big activity was an outdoor zombie scavenger hunt/wide game. One of our older sons had hidden items outside in our yard in the trees. I wrote out a list of items that the boys had to retrieve and explained the game to them. The items needed to be brought one at a time to the safe area (the playhouse) without the person being tagged by a zombie. My three girls had dressed like zombies and were set to chase after the boys trying to get their items to the safe area.

What the boys didn’t know (including the birthday boy!) was that our oldest son had come over earlier in the day to surprise his brother. He had hidden upstairs getting zombified and then had hidden in the trees to be discovered during the game. Once they found him, he was another zombie who could tag them while they were in the open grass area.

The list of what the party guests had to find in the trees:

Creating the food for this party was a lot of fun. 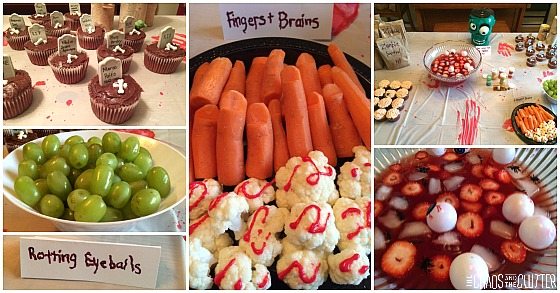 To make the punch, I mixed frozen red fruit punch with 7-Up and then added plastic eyeballs, sliced strawberries, and ice cubes I had made with plastic flies frozen in them. (Where there are zombies, there will be flies!)

Miss Optimism cut carrots to look like fingers and we drizzled red food gel onto cauliflower to look like brains. We set out a bowl of green grapes with a tag of “rotting eyeballs”. During the party, I served “bloody fingers” which were just barbequed hot dogs with ketchup.

Instead of cake, we served two types of cupcakes. We had vanilla cupcakes with chocolate icing decorated with little gravestones and bones. I used an edible marker to write on the tombstones. I added gummy zombies to a few of them as well. The other cupcakes were chocolate with vanilla icing decorated to look like brains. Miss Optimism decorated those entirely herself. It is wonderful having a daughter who likes to help!

For treat bags (otherwise known as loot bags), I used brown paper bags. We titled them “Zombie Survival Kits” and added some blood drips in permanent marker. My girls were a big help with these details. 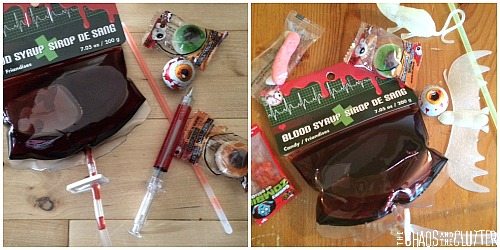 This Zombie party would be great for not only a birthday but for a Hallowe’en or Night of the Living Dead or Fear the Walking Dead kickoff or finale party.

If you are looking for other fun party ideas, be sure to check out our popular Minute to Win It party. 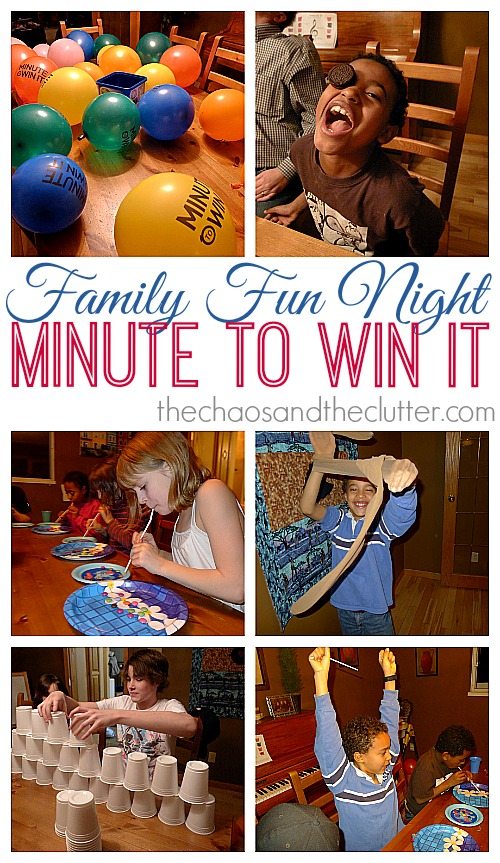